I left Cassadaga in a monsoon. At first I thought I was being a whiny tourist (“Oh, waaah! It’s raining!”) or at least exaggerating. The rain was so fast and steady that even with the wipers on fast the windshield was never clear. I was driving about forty-five on a 65 mph  highway… and so was everyone else. I’m used to California where people swoosh past me and splash me with their wake, and that wasn’t happening. I was moving the the flow of traffic. The water was not running off the road, because there wasn’t time.

Later I heard people in St Augustine talking about it, and they used the term “monsoon,” so I wasn’t wrong.

About forty minutes out of town the clouds broke and the rain slowed and then stopped completely. It was sunny with big fluffy clouds when I reached the St Francis Inn Bed and Breakfast in St. Augustine.

The St Francis Inn faces onto St Francis Avenue, which runs east-west, but, because the original building was Spanish style, the entry is through the courtyard, so the address, counter-intuitively, is on St. George Ave.While the original building had two floors a later owner added a third in the mid-nineteenth century and my room, called Lily’s room, was on the top floor, with two dormer windows. One overlooked St George at the house across the street which is part of the inn. The other let me gaze down into the courtyard.

I loved that courtyard. I loved everything about my stay there, and I will devote an entire blog post to them. For the purposes of this column I will say they are expensive (not the most expensive), but they are worth what you pay and like any modern inn, they add in a lot of bang for your buck, like a wine-and-snacks social hour, a dessert bar every evening, s’mores every evening and lots of free passes to tourist events. You get your money’s worth.

I got there early enough that I had time to walk around. My plan was to walk to the waterfront, three blocks away, and I did that but along the way I stopped at the Oldest House Museum, about four doors down from the Inn. Now, here’s a thing about St. Augustine; many of things they have are billed as being the biggest and/or the oldest. On “the oldest European [anything] in the continental USA,” they can make a pretty compelling argument, because St Augustine was settled by the Spanish in 1568 — they have records — and has been continuously inhabited by Europeans since then. For other things, tour guides and docents tend to have disclaimers and phrases like “We say we’re the biggest/oldest/best in Florida, because we can’t prove we’re biggest/oldest/best in the entire country….. buuut.…” 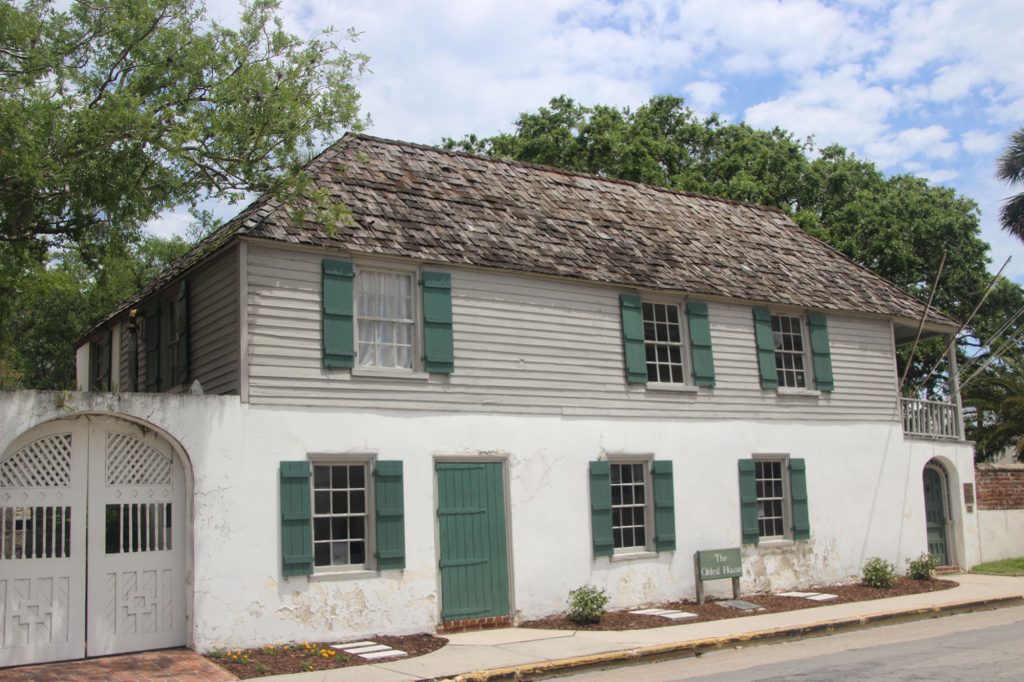 Exterior of The Oldest House. The green door would have been added during the British occupation period, since the original entrance would have been through the courtyard.

In this vein, the Oldest House Museum may not be the oldest house, although the existing records make it pretty darned old. What they’ve done is used the house to showcase the various periods of European colonization; First Spanish Period, British Period, Second Spanish Period and Statehood Period. The house itself is called the Gonzalez-Alvarez house, after two of the owners. The original two-room house dates from at least 1721, when Tomas Gonzalez y Hernandez, his wife and 10 children lived there. It is low-ceilinged with a fire pit in the middle of the floor and a detached kitchen across the courtyard. The original house probably did not have glass windows, even though they existed, because Tomas would not have been able to afford glass on a soldier’s salary. The family slept on Spanish moss-stuffed pallets on the floor. 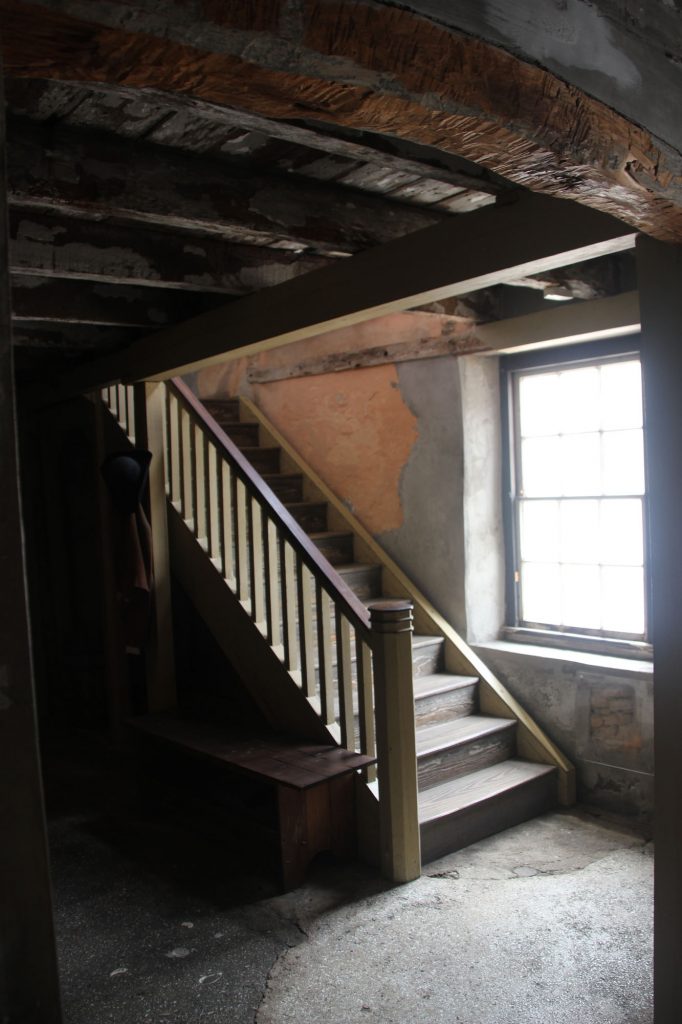 Those were some low ceilings. During the First Spanish period there would have been no staircase.

In 1763, when Spain ceded Florida to England as the result of losing a war, the Gonzalez family returned to Spain. An Englishman named Peavitt bought the place and turned it into a tavern, which was insightful, since the former Monastery of St Francis across the street had been turned into a barracks by the British. Peavitt added a wood framed upper story. His wife Maria was a successful midwife and developed the family fortune, but when she was widowed, since English law didn’t allow a woman to own property, she remarried a British soldier exactly half her age, who spent her fortune in about three years. 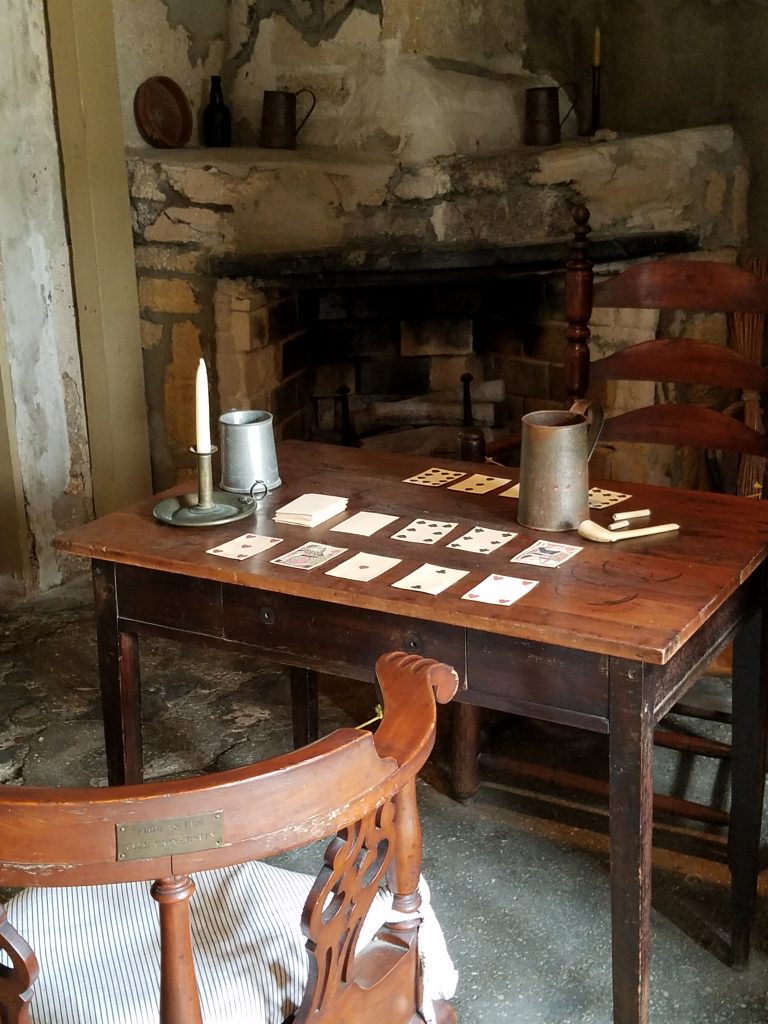 Welcome to the tavern.

The territory and the city returned to Spanish control in 1790, after Britain basically lost its hold on North America completely, and a family named Alvarez bought it and expanded the second floor. 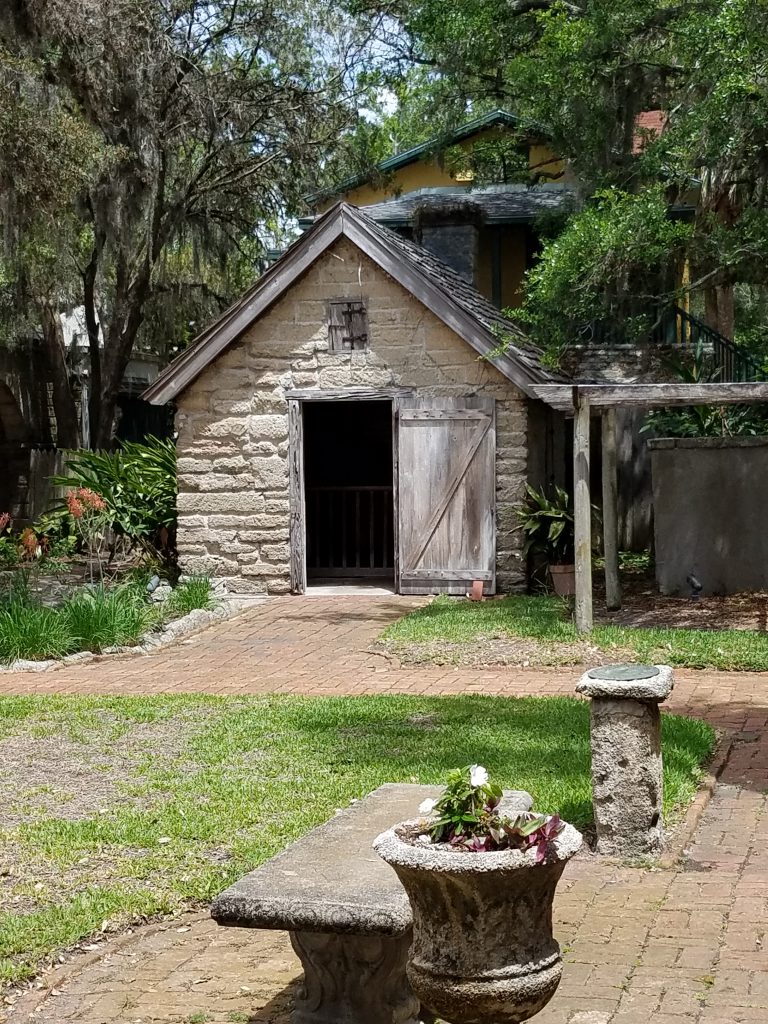 The building materials used were part of the interest for me. The original dwelling was made of coquina, as were lots of St Augustine buildings. Coquina is a kind of stone made of fossilized sea shell. The natural lime in the shells creates cement. They quarried it on Anastasia Island. The stone is solid but porous, which turned out to be handy when British cannon were fired at coquina walls, because the walls would not shatter, they’d just dent. If you look at it closely you can see the details of tiny shells.

The other thing about coquina is that it’s stone and therefore didn’t burn. This was handy, because various people (coughBritishcough) burned St. Augustine at least twice.

The early water filter was another cool thing. This bowl is carved out of lava from the Canary Islands. It was filled with the sandy, muddy water from the eight-foot deep well in the courtyard, and the porous rock filtered out the sludge. 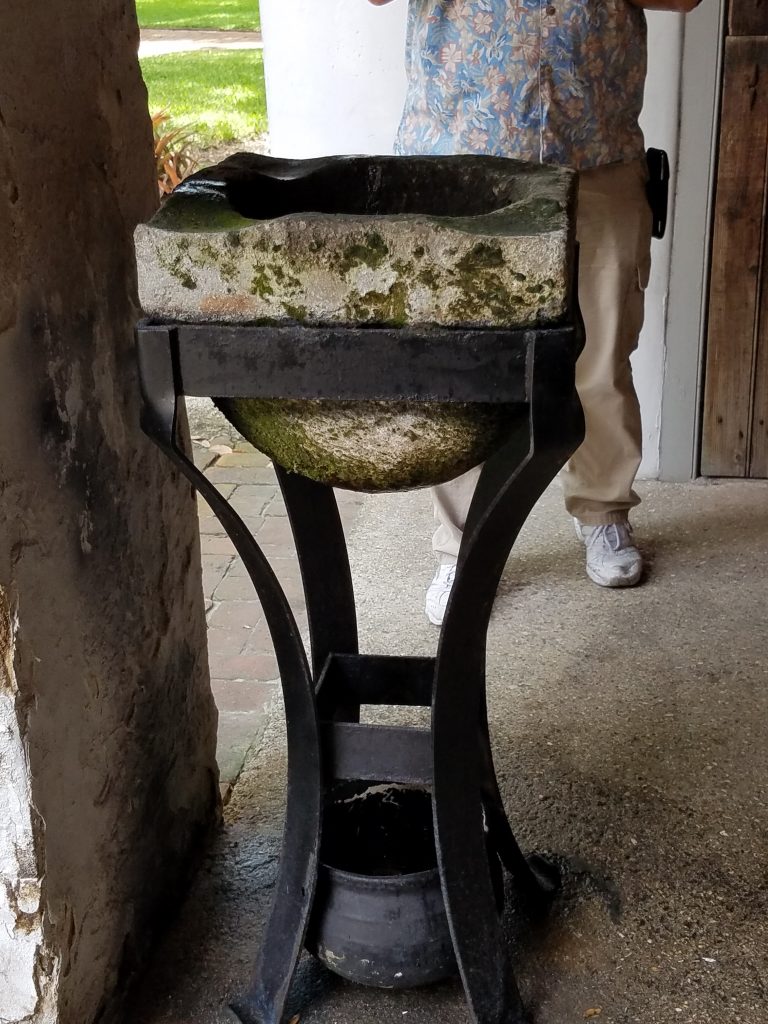 As our guide described it, “An eighteenth century Brita filter.”

The tour took about forty minutes and here was more to see about the development of St Augustine in the adjoining building. It was still bright and sunny when I left and headed down to Matanzas Strait, the Bridge of Lions and Cathedral Way.

This entry was posted in View from the Road and tagged British, coquina, Florida Trip, Oldest House, Spanish, St Augustine. Bookmark the permalink.