Tuesday evening I met Kat Hooper and we took a sunset cruise on the Schooner Freedom. The water was calm, so calm that on the way back the captain fired up the engine for a few minutes to get us moving. The scenery was beautiful with the lowering sun tinting everything orange and copper, the city standing out in shades of cream and red. Pelicans flew by and dolphins played around us on the way back. 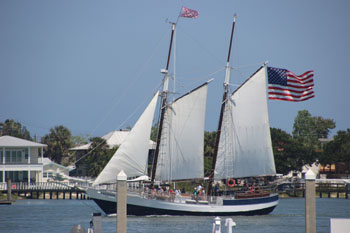 The Schooner Freedom under full sail.

I walked down to the office from my B&B. While I was waiting for Kat, a lithe young woman with tanned skin and blond hair strode up. She was talking on her phone. She ended the call and jammed the phone into the pocket of her shorts. She sighed heavily enough that I could hear it five feet away. Staring off into the middle distance, she stalked past me. I hoped she was on the crew of the pirate ship Black Raven and not our boat. 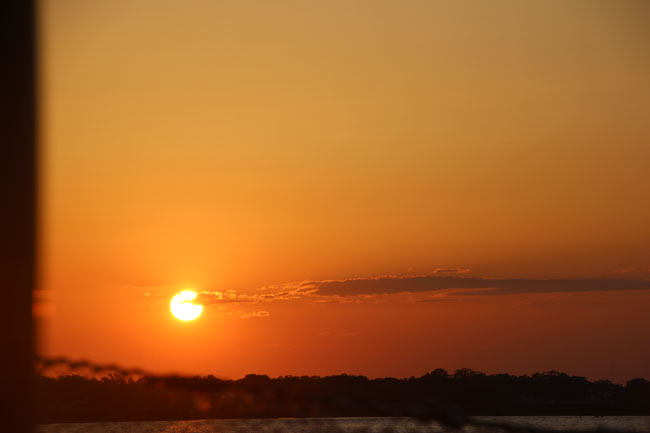 She was crew on our boat. She was professional; whatever had upset her on the phone call did not surface during the ninety-minute cruise. She was lively, funny and friendly as she ran through the safety features and explained how to use the head belowdecks. She gave a good explanation, but I’m glad I didn’t have to use it, because I wasn’t sure I would remember it. Captain Steve motored us away from the dock and then our trio of sailors leaped about, raising the sails (with a little bit of well-supervised help from two passengers. That’s part of the cruise). Once we were away from the docks, the crew opened the ice chests and offered wine and beer. 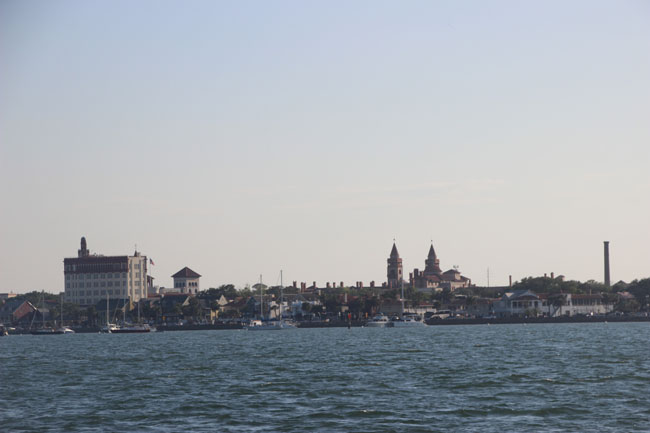 From the Strait, St Augustine in the sunset.

Walking down to the berth, Kat and I met a couple who were celebrating an anniversary. They’d gone on a sailboat cruise on their honeymoon and were commemorating the experience. The boat will hold 27 passengers and I think we had about that many.

The blond woman, Sydney, told the women sitting next to me that the boat weighted 33 tons. I’m not positive I wrote that down right, but that’s what I remember. It also seemed like the cruise was tied to the Bridge of Lions schedule, although I thought we cleared the underside of the bridge by five feet. (It didn’t look like we were going to clear it!) 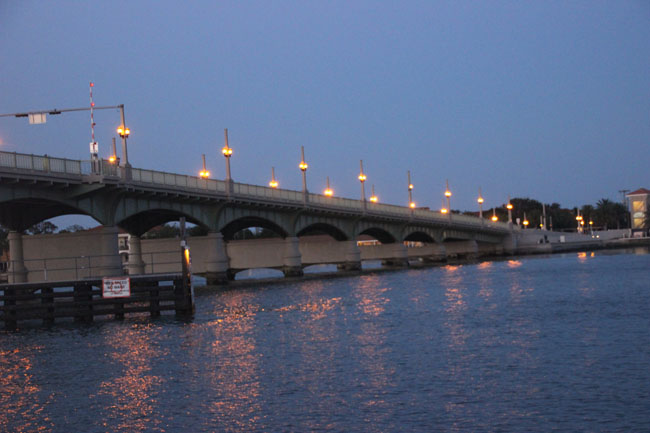 The Bridge of Lions at Twilight

A cosplay pirate boat blew past us at one point. Behind us, the Pirate Ship Black Raven was well into its raucous, not-completely-historically-accurate cruise. I heard Captain Steve on our radio say, “Over, Black Raven. Yeah, that’s good.”  A few minutes later the dreaded marauder put on a burst of speed, shooting across our bow, hooting and hollering so loud we could hear them easily. Kat took a sip of her white Zinfandel and said, “Oh, dear, I hope they don’t try to board us.” Thank goodness, they did not, and our cell phones and valuables were saved. 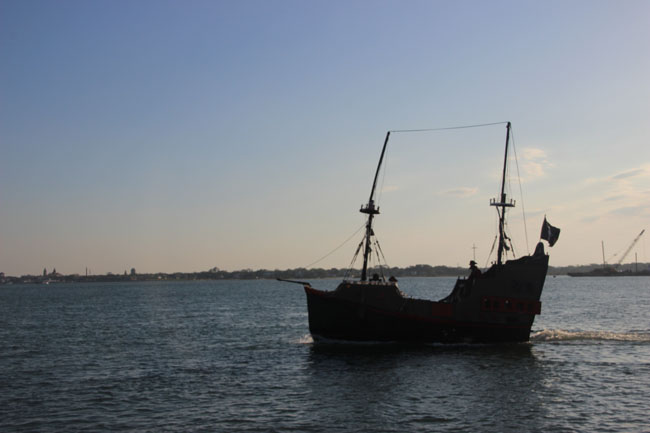 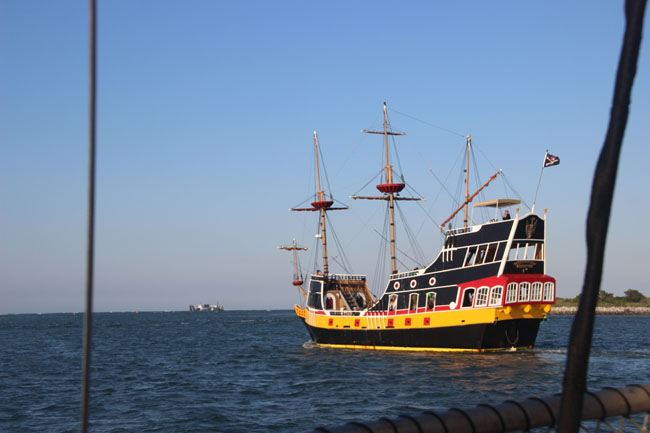 The scourge of the seas, Black Raven.

The woman to my left had been a librarian for many years. Now retired, she was writing a series of articles about her own personal philosophy, of which forgiveness was a cornerstone. She hoped to turn them into a book one day.

It was nice to find out all the things Kat and her family were doing. Her dreams of a quiet summer were dashed in a good way because several research projects had suddenly come her way. A lot of work, but a lot a value for her and her students.

Having seen a sand-dredge from the lighthouse, I was sure that this vessel was one until we got closer. Plainly it’s a barge. 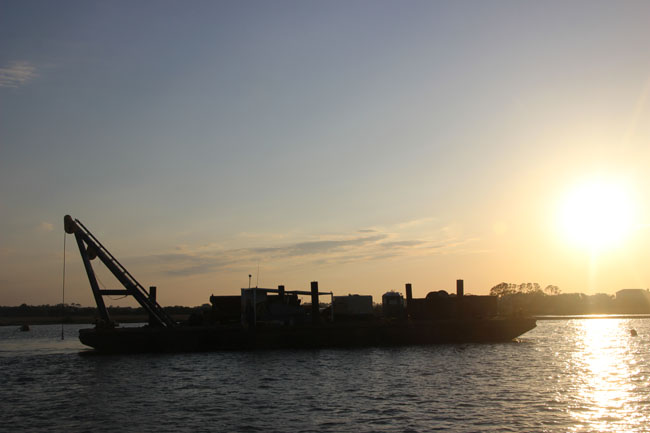 The Cut, which is the opening to the ocean from Matanzas Srtait, was artificially made (I think Captain Steve said in the 1950s, but I haven’t checked that) after the previous opening which was farther south began to silt up. It’s now completely filled in. 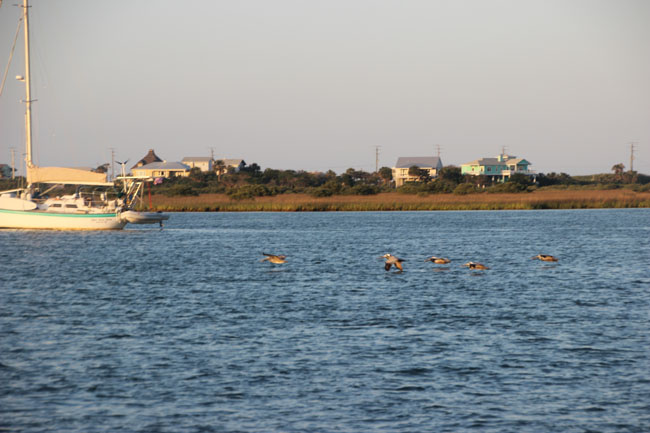 Pelicans flew parallel with the boat several times, and we saw one or two egrets in the shallows. Kat and I drooled over the houses on the long narrow island facing us and facing the city, although I wouldn’t want to live there during hurricane season.

Dolphin fin with a mansion in the background.

The return trip was the second time on the entire trip that I felt cold. It was a novelty. I had a long-sleeved blouse in my tote but it was too much trouble to dig it out, so that tells you that I wasn’t very cold.

Schooner Freedom also offers longer afternoon cruises that follow marine wildlife and some day I’d like to take that one. For a chance to visit with Kat, a fun evening and some beautiful scenery, the evening cruise was perfect. 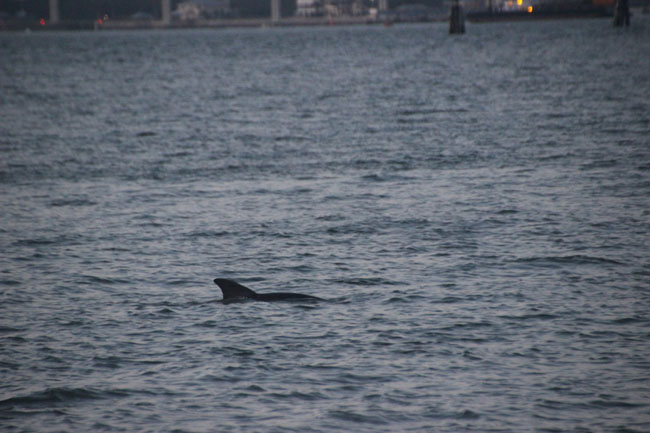 This entry was posted in View from the Road and tagged Black Raven, Florida Trip, Matanzas Strait, Pirates, Schooner Freedom. Bookmark the permalink.