Amputation, Anyone? The Military Hospital Museum

The tour of the Spanish Military Hospital Museum was one I had not planned to take. For some reason, I don’t know exactly why, when I walked down Avila Avenue on Sunday the hospital did not attract. It might have been that I was just hungry and distracted. On Tuesday, after the Distillery tour, it’s equally possible that the New World gin and tonic, the taster shot of vodka and the taster shot of rum were influencing my decision. Anyway, I went in on a whim.

The hospital’s original name was Our Lady of Guadalupe Hospital, named after the American continent’s visitation by the Virgin. It dates from the second Spanish period which ran from 1783 to 1821. Originally the hospital comprised two buildings, one directly across the street but the second building burned in 1818.

I was the only person on my tour, and Katie, my docent, provided a bonus. She writes fanfic! She writes English Regency period stories set in the Harry Potter universe. Since the hospital’s history overlaps the Regency period, a lot of what she has learned for the tour is information she can use in her stories, especially if she has a potion master character, since the apothecary piece is a big part of the tour. 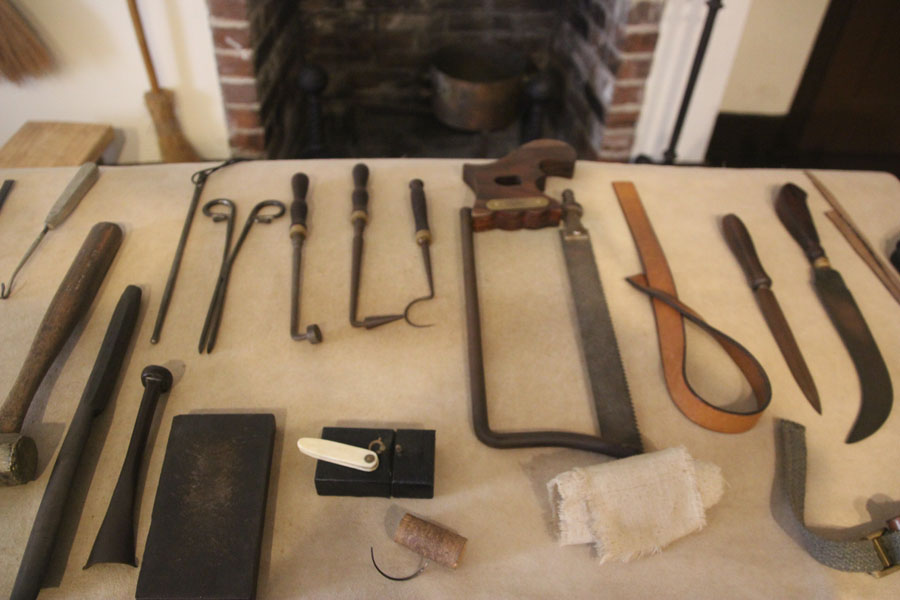 Yikes! Do you think my insurance will cover this?

First, though, she walked me through the eighteenth/early nineteenth century amputation process. Amputations were surprisingly common. In a subtropical climate before pharmaceutical antibiotics, infection was a serious and often fatal business. It was better to remove the affected body part if the surgeon could. Katie had an array of instruments – a tiny guillotine-like thing that many cigar aficionados might recognize (used for amputating parts of fingers) while a chisel and hammer which was used for amputating a whole finger. For larger limbs the surgeons used knives to carve away the flesh, leaving a flap to sew up across the site, and a saw. Amputations happened quite quickly. They could remove a leg in a minute and a half. The patient was drugged on opioids (actually laudanum, an alcohol and opium mix).

The hospital’s survival rate for major amputations was about 70%. That’s poor by our standards but for the time that was miraculous. Up north in the newly-minted United States, the rate was about half that. Again, climate might have helped, especially in winters, but basically, Spain’s adoption of hygiene practices had a lot more to do with it.

In the eighth century, Berber Muslins conquered the Iberian peninsula. They ruled large parts of Spain for about seven hundred years. The middle eastern caliphates were at least a century ahead of Europe (if not more) in the areas of science, mathematics and medicine, and Spanish doctors practiced hygienic techniques even if they couldn’t articulate the reason for it. For example, surgeons washed their hands and their instruments with hot water and vinegar before and after each surgery. Once a patient was released, the mattress covering for their cot was washed in boiling water and lye soap. The Spanish moss that was used as mattress stuffing was also boiled, then carded and combed almost like wool. This killed any insects and also took care of a lot of germs.

Katie handed me some treated moss. It changes in both color and texture after boiling, which is good. Spanish moss would be itchy! The color was a chocolate brown. 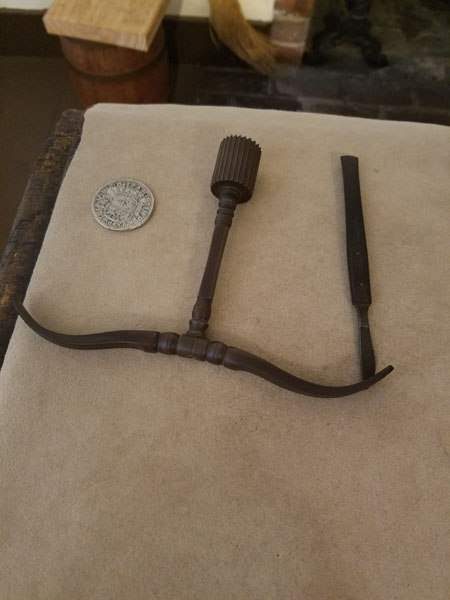 You may feel a slight pinch as we drill this hole in your skull.

Hospital surgeons also did trephining to relieve pressure in the brain. For those of you who did not read Philip Pullman’s His Dark Materials trilogy, trephining means cutting a hole in the skull. This gives the brain a place to swell into without bruising itself against the walls of braincase. Later, when the swelling had subsided, the surgeons covered the hole with a silver coin. They probably didn’t know exactly why they used silver, but silver is seen as a metal with antimicrobial properties, so once again, it’s something that would have reduced the potential for infection. 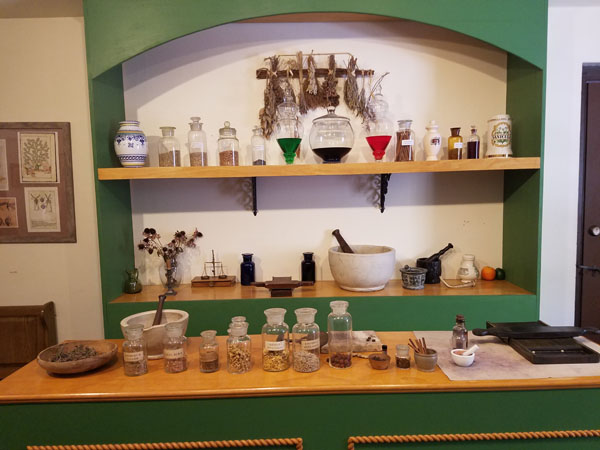 Katie led me into the second room, which was the apothecary. Wounds, she said, were often packed with a substance called “lint,” made of isinglass and silk. Laudanum was, as you’d expect, the go-to pain killer. Other medicines included castor oil, mercury, quinine bark for malaria and other fevers, calendula as an anti-inflammatory and valerian to aid with sleep. Lots of herbal medicines were delivered in the form of an infusion or tisane; leaves steeped in hot water. Some were condensed into a tincture (preserved with alcohol). Cochineal, which is an insect and imparts a lovely red color to things, was also used as a medicine. “I like to say, ‘take your bug juice,’” Katie said. 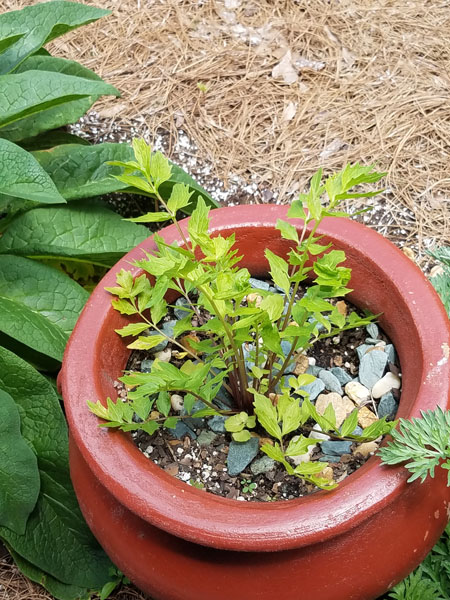 I think this is calendula.

I enjoyed all the tours I took (possibly I enjoyed the distillery tour the most) but the two best tours for a writer, especially a fantasy writer, were the Oldest House Museum and this one. They both gave me real world details. I’m trying to incubate a magical story, set in St. Augustine, with a female apothecary, old magic and maybe a Spanish soldier with a piece of silver in his skull? 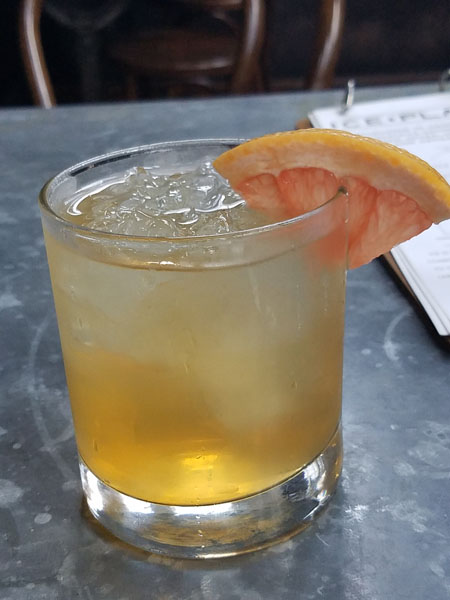 This fine herbal and alcohol concoction is also tranquilizing.

This entry was posted in View from the Road and tagged eighteenth century medicine, Florida Trip, Spain, St Augustine. Bookmark the permalink.