The Castillo de San Marcos pretty much draws the eye from anywhere on St. Augustine’s waterfront. The best pedestrian view is from the Bridge of Lions, but once you hit Matanzas Strait you can’t miss the stone walls to the north, perched on the very tip of the point. 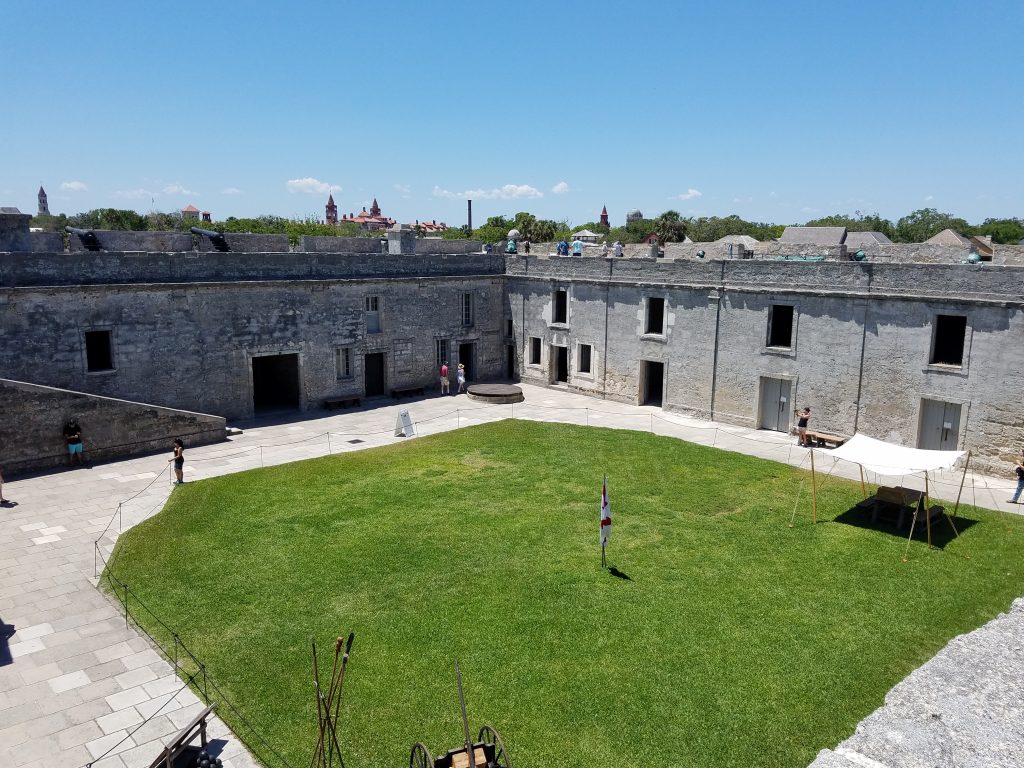 The Castillo’s thick walls are made of coquina, which made the fort impregnable. British men o’ war ships would fire cannon balls into it, only to have the “crunchy” rock dent, sometimes even holding onto the ball (or so the story goes) rather than shatter. 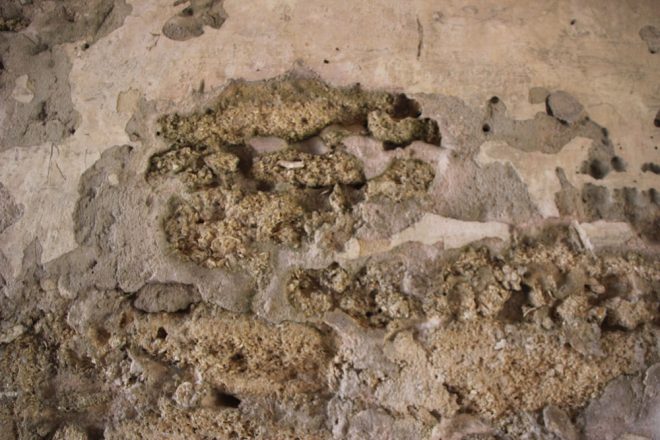 Here is a close-up of coquina, although you can’t see the tiny shells too well.

In 1702, British forces from Carolina, commanded by the Carolina governor James Moore, besieged the fort unsuccessfully for six weeks. Because they had attacked Spanish settlements north of St Augustine on the way down, the St Augustine alcalde knew they were coming, and sent messages requesting reinforcements. He also moved livestock, provisions and civilians into the fort. Moore shot cannon balls at the fort walls every day with no success and was routed by a reinforcement fleet from Havana on December 30. It is also reported that he set the city on fire before he left (and that he was forced to burn many of his own ships.)

I can attest to another benefit of coquina, especially in warm humid May weather; the thick walls naturally insulate and inside the fort’s buildings it was about ten degrees cooler.

The docent at the counter was chatty and helpful. His favorite story, or one of the them at least, is about the moat. The fort had a dry moat originally. It was in the twentieth century that someone decided a wet moat was needed. (I didn’t make a note of exactly when.) A wet moat would have been easy to dig, though, because the water table here is about eight feet. Once the water filled it, the fort’s foundation began to shift and cracks appeared in the thick walls. The Army Corps of Engineers hurried to drain the moat, and everyone said, “Let’s not do that again.”

This worrisome if artistic crack is what happens when you flood a moat alongside the fort walls.

The fort’s array of cannon was formidable. 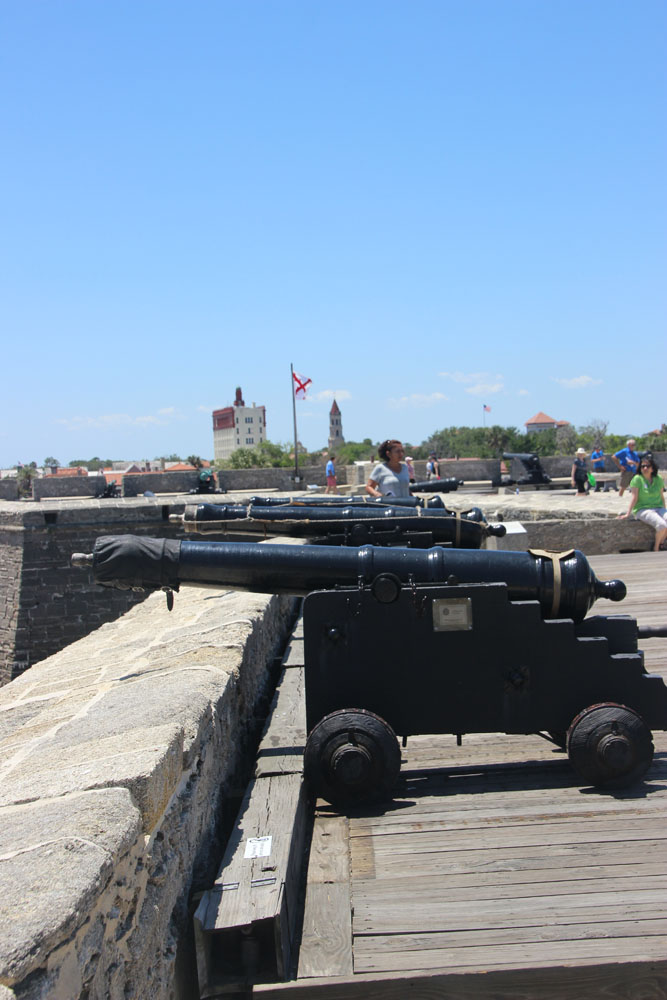 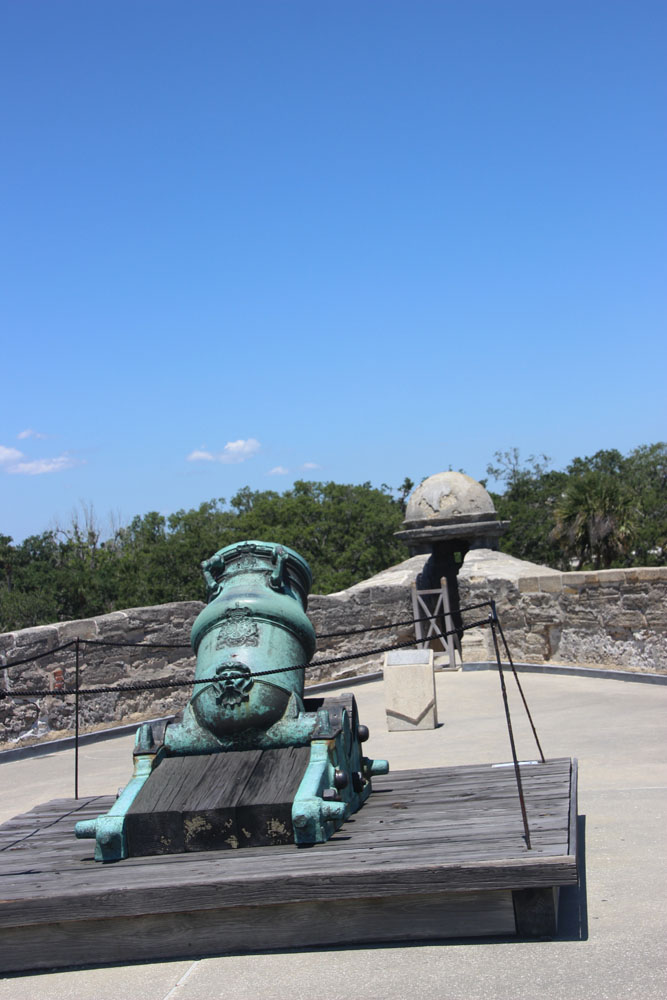 Cannon facing the northwest bastion which is three inches shorter than the others. 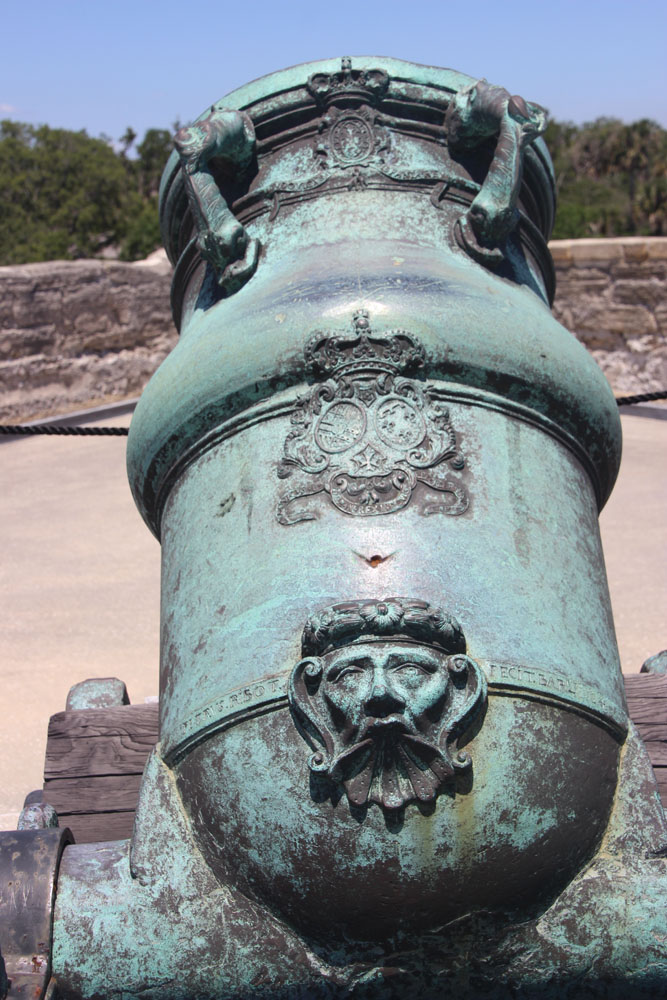 Francis Drake burned St Augustine the first time. To the Spaniards he was a pirate and to the English a patriot. It seems like this burning of towns wasn’t very sporting of the British, but then again, Pedro Aviles Mendenez, founder of St Augustine, slaughtered 17,000 Huguenots in Matanzas Strait, so I guess nobody was really using their company manners. 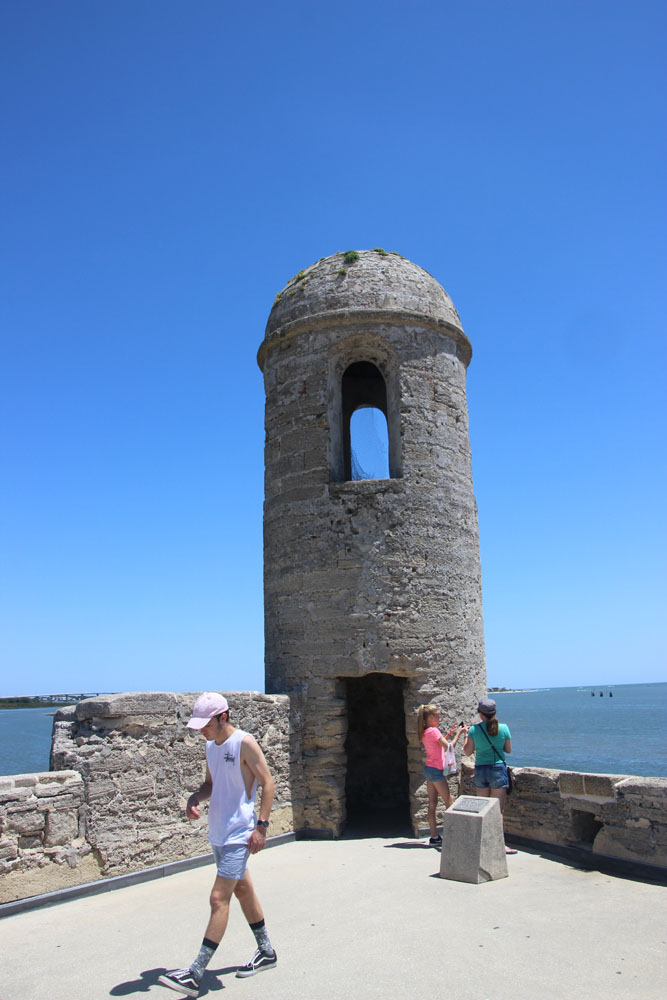 The stone bastions were used for signalling. 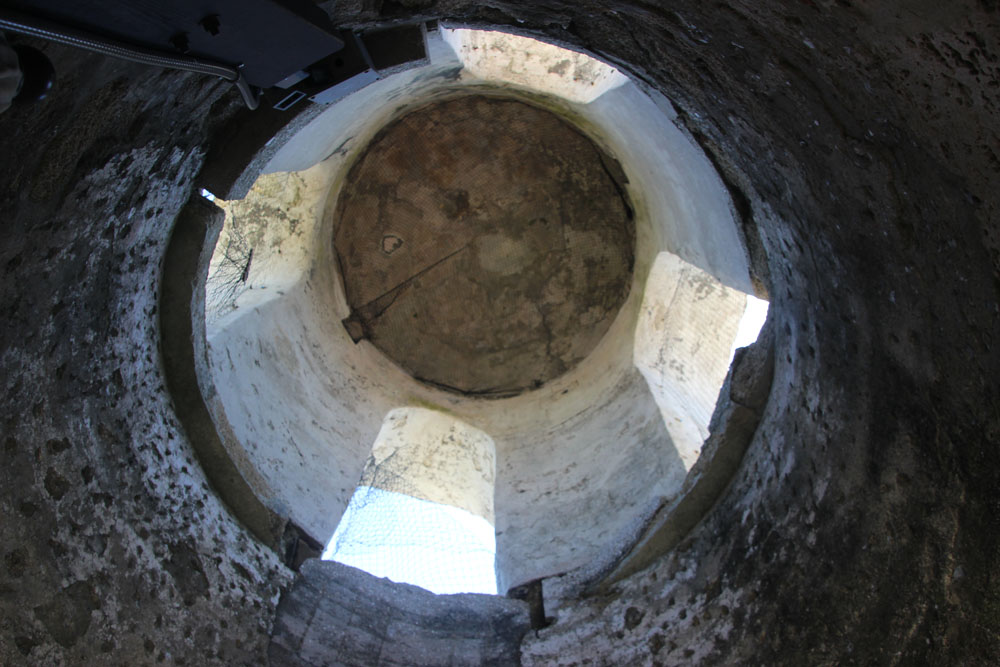 The interior. Nice and cool in here! 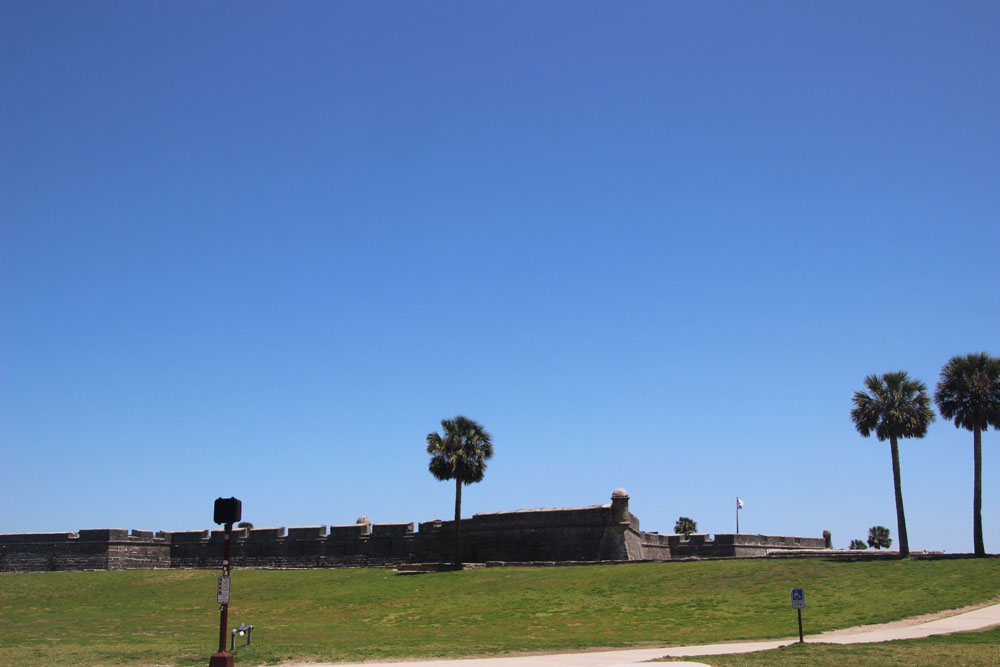 The view from Avenida Menendez 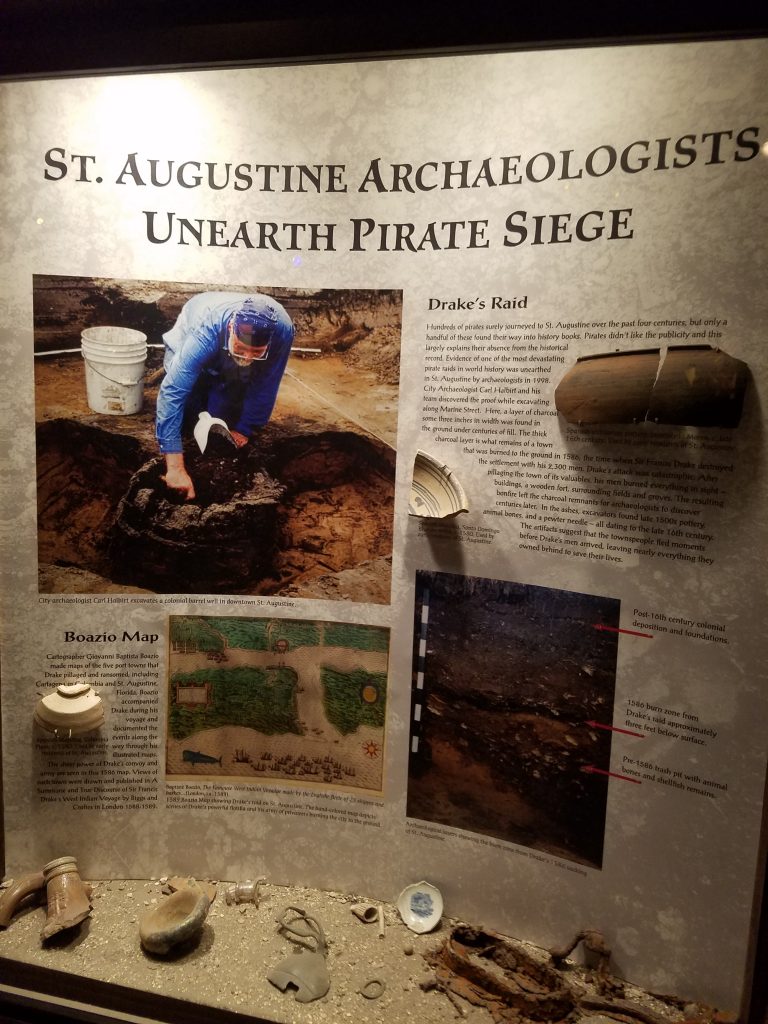 Pirates, of course, were brutal to the people on the ships they plundered, but they offered stock options to their own crew (every member got a share of the haul, even if some – the officers – got a bit more than others); and they elected captains by vote. And, as we all know from the first Pirates of the Caribbean movie, sometimes they unelected them, and sometimes they unelected them rather harshly. And, yes, there were women pirates and women pirate captains, quite successful ones. 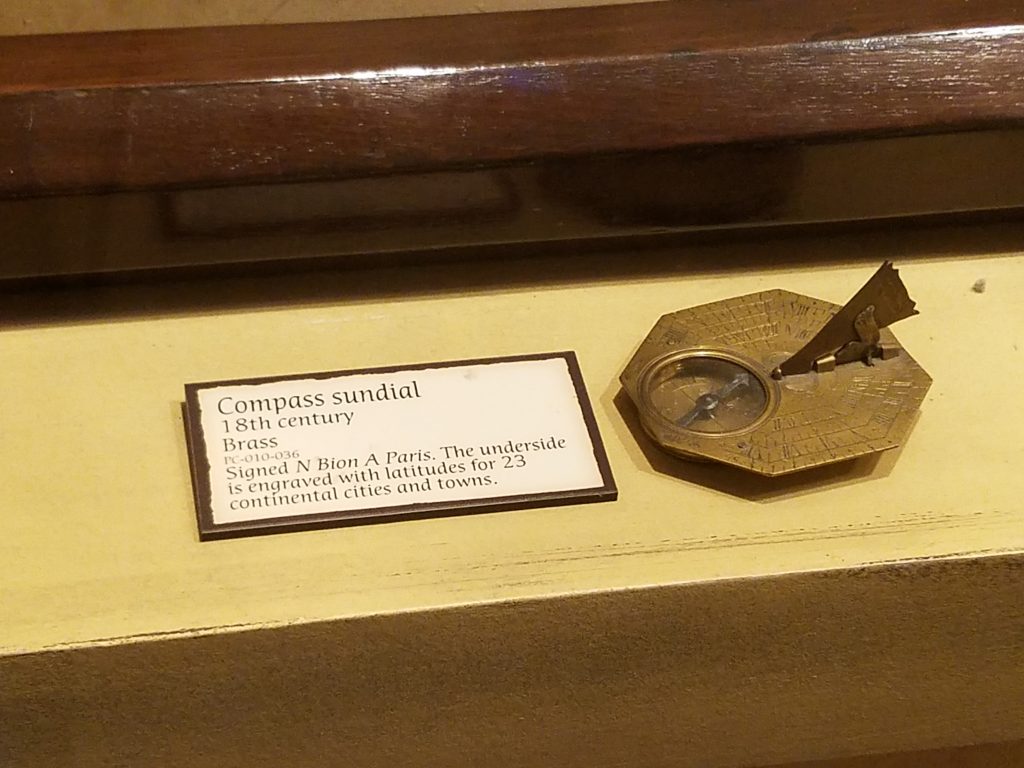 Nautical tools on display at the Pirate Museum.

Because I started the day at the lighthouse and the gator farm, I had my rental car. I could have walked to the Castillo and back, but I truly would have preferred not to especially when it started getting hot. If you’re active and athletic, find out if your B&B offers bicycles (the St Francis Inn did). That could be the perfect compromise.

This entry was posted in View from the Road and tagged British, Castillo, Florida Trip, Pirates, Spanish, St Augustine, waterfront. Bookmark the permalink.