And Now a Word About Alligators

(Advisory: The sixth photo down is a snake picture. Scroll past it if snakes freak you out.)

The main alligator lagoon forms the ground floor of the rookery, guaranteeing that no tree-climbing rodent predators (rats, etc) will be climbing trees to steal eggs. There is a smaller lagoon—a lagoonette?– in the center of the park. As I’m getting ready to leave this woman hops down into it, surrounded by about fifteen alligators. She has a pouch on her hip, a long pole and a microphone. 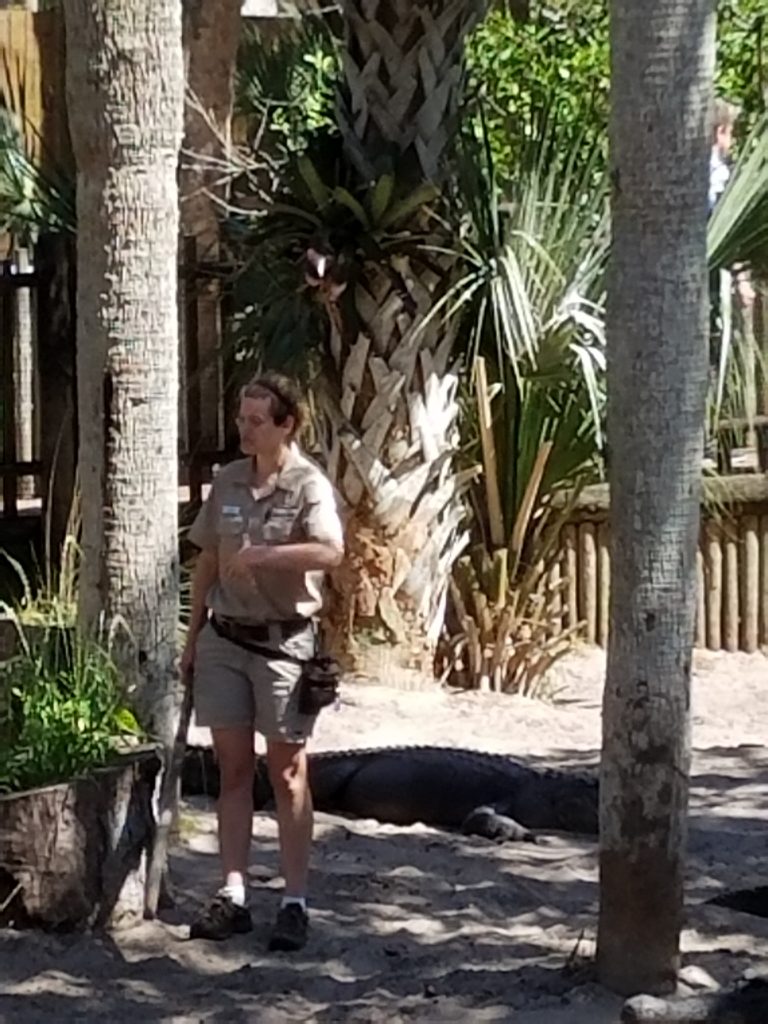 I don’t think you could pay me enough to take this job.

“It looks like our big fellows here are slow and lazy, but they can move surprisingly quickly so we ask that you keep away from the edges of the enclosure, and do not drop or throw things into the enclosure. As the same time, we know that accidents do happen, so if you do drop something let a park employee know and we will retrieve it for you.”

Note to self; do not lose your glasses in the alligator enclosure. 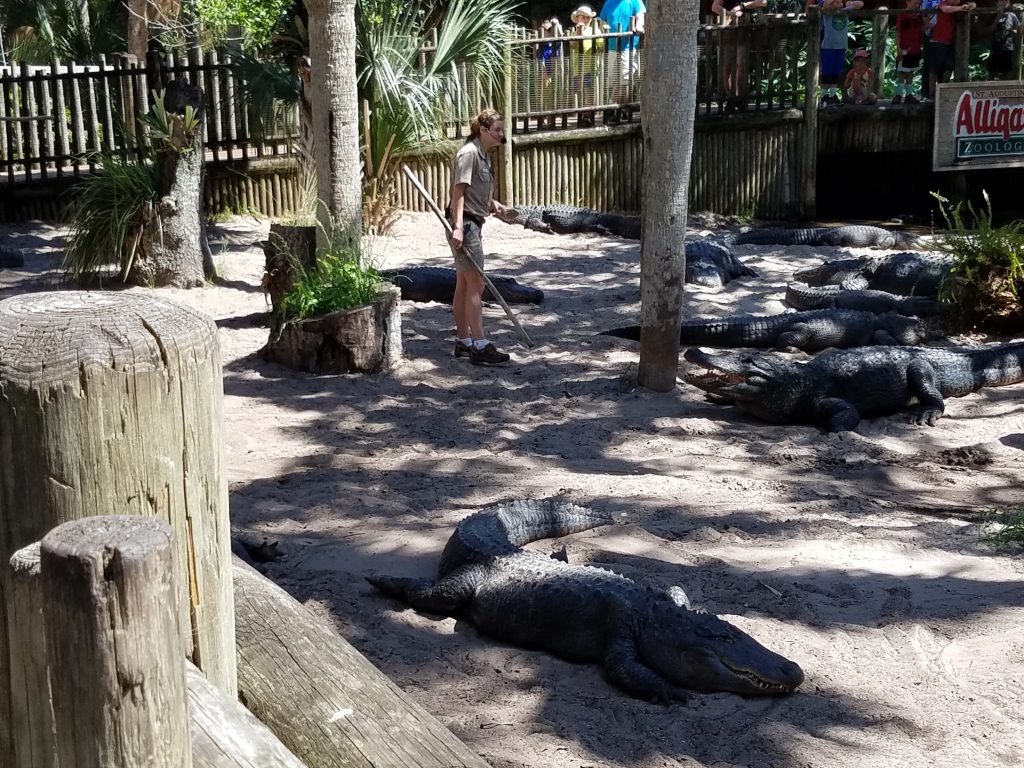 See the gator  on the right, approaching her with its mouth open? That’s Warren. 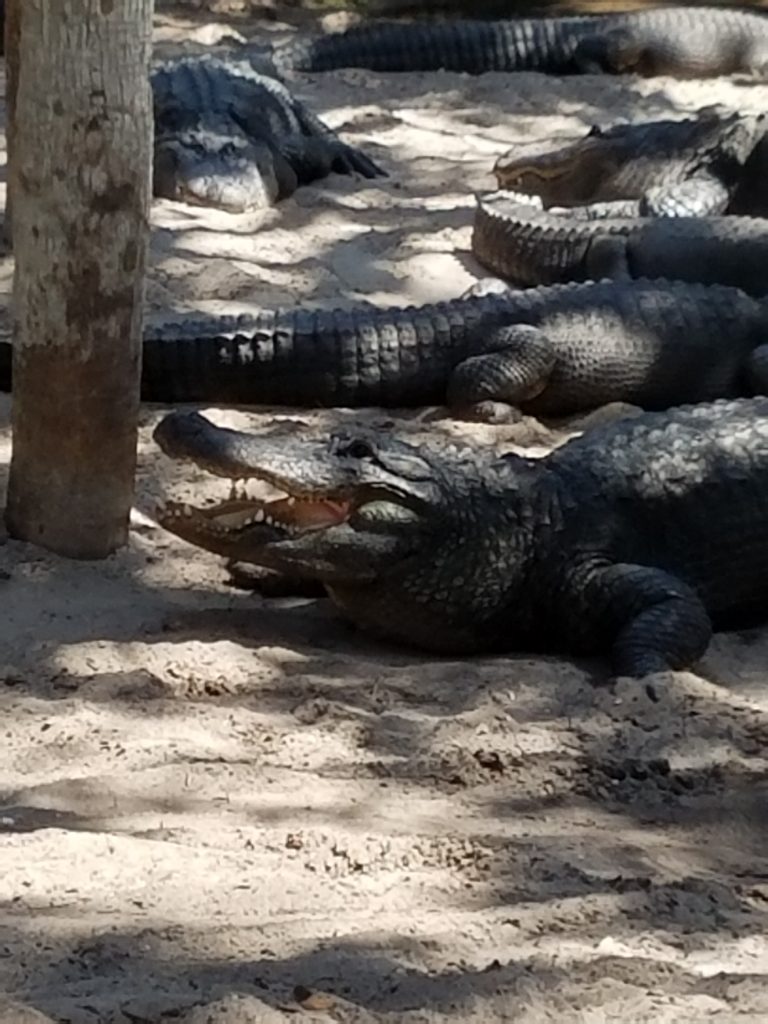 Wave to Warren the Gator, everybody! From a safe distance.

What are you doing then? Get out of there!

“Gators raised domestically will do what this one right here is doing.” That gator is sliding toward her with its mouth open. “That’s Warren. See, he’s approaching demanding food.”

She throws him something from the pouch.

“And yes, we do name all our gators, because that’s something else people didn’t know until fairly recently. People thought crocodiles and alligators were primitive and acted mostly on instinct, but crocodilians have surprisingly complex brains. They are the only reptile to have a cerebral cortex, like humans, and they are smart enough to recognize their names.” 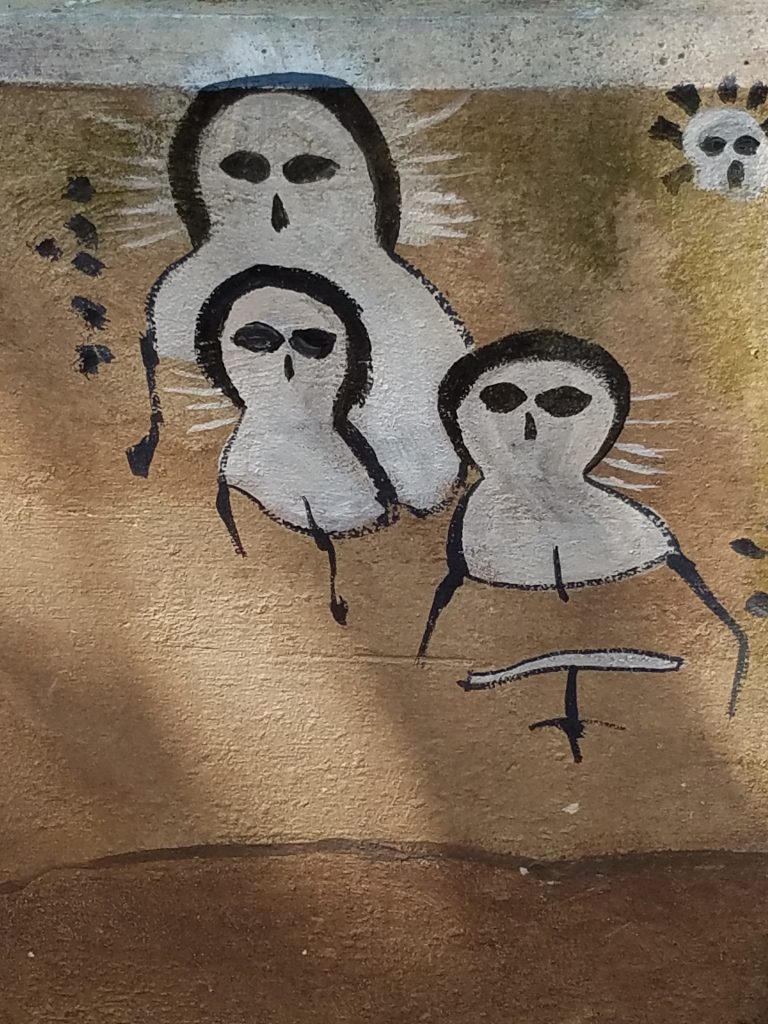 I don’t think this is official park artwork. Are they birds? Or the spirits of bipedal mammals who didn’t move fast enough?

Wait, what? Able to tear your leg off, fast enough to catch you if you’re running, and now they’re smart, too? Oh, hell, no!

Standing there I have an epiphany, a terrifying moment of revelation, when the veil of denial shreds around me and I confront the terrible, naked truth.

Those four Lake Placid sequels SyFy did weren’t bad movies, they were documentaries. The reptiles are smarter than the primates. It was all true! 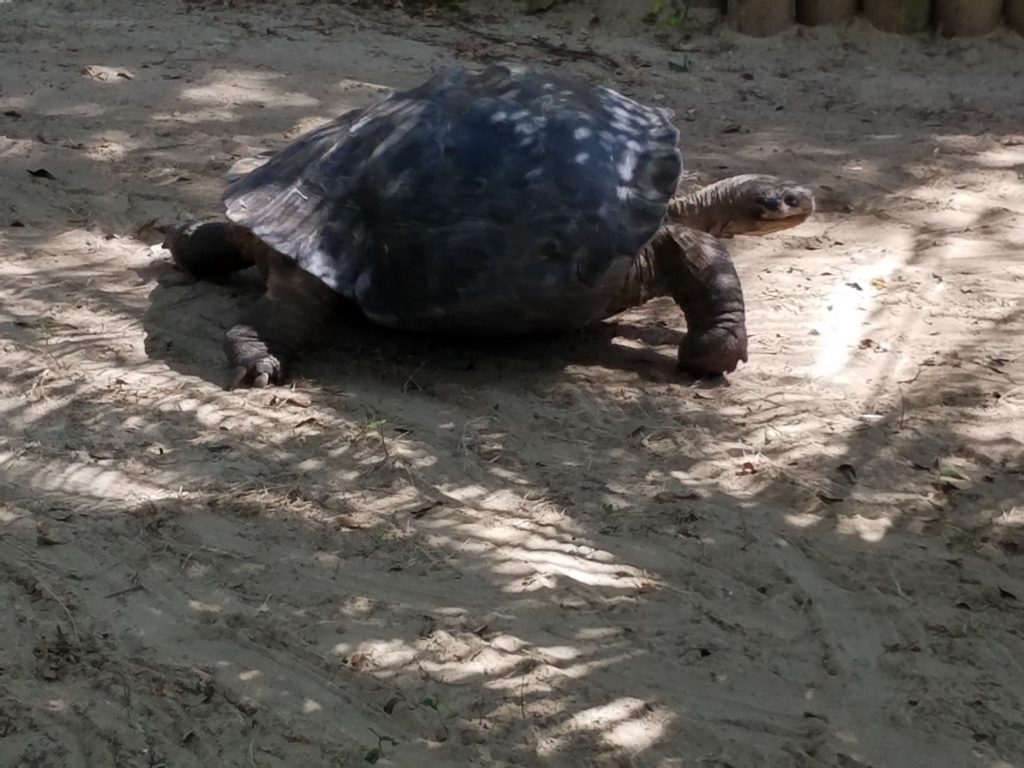 I petted a ball python. I also got to pet a baby caiman, whose snout was wrapped with one strip of packing tape, probably to reassure people that it couldn’t bite. The tape didn’t look too tight and the caiman didn’t seem distressed; it didn’t seem all that thrilled either. Reptiles are a hard read. 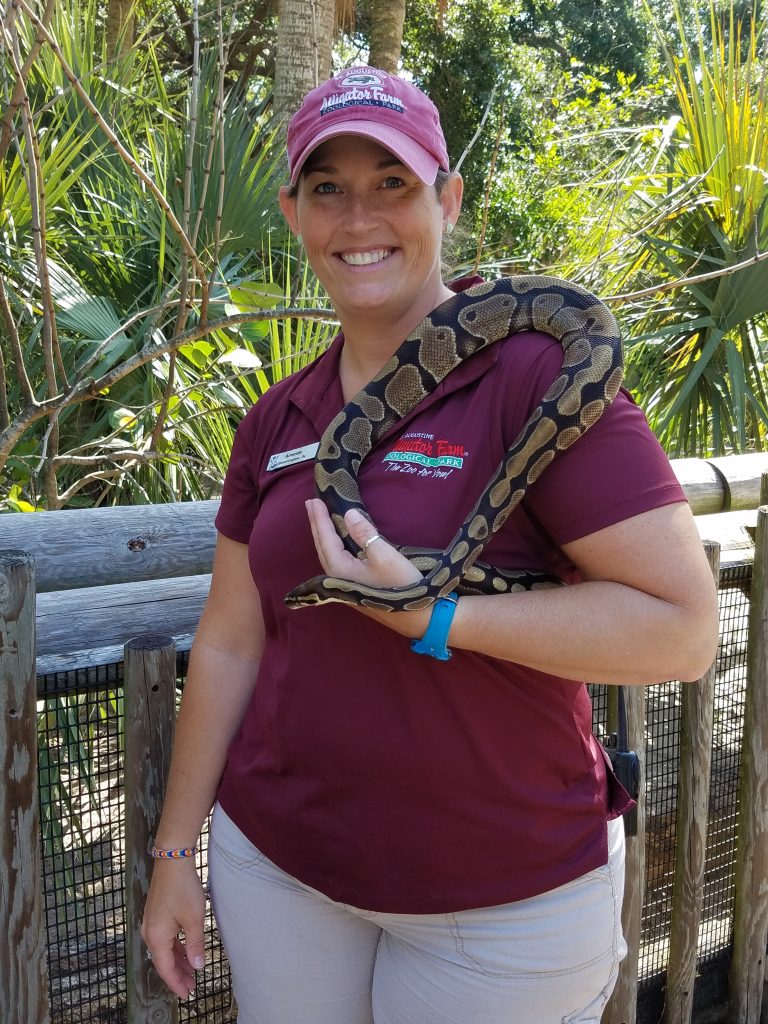 Park employee with a ball python.

I saw turtles and tortoises including a Galapagos tortoise. 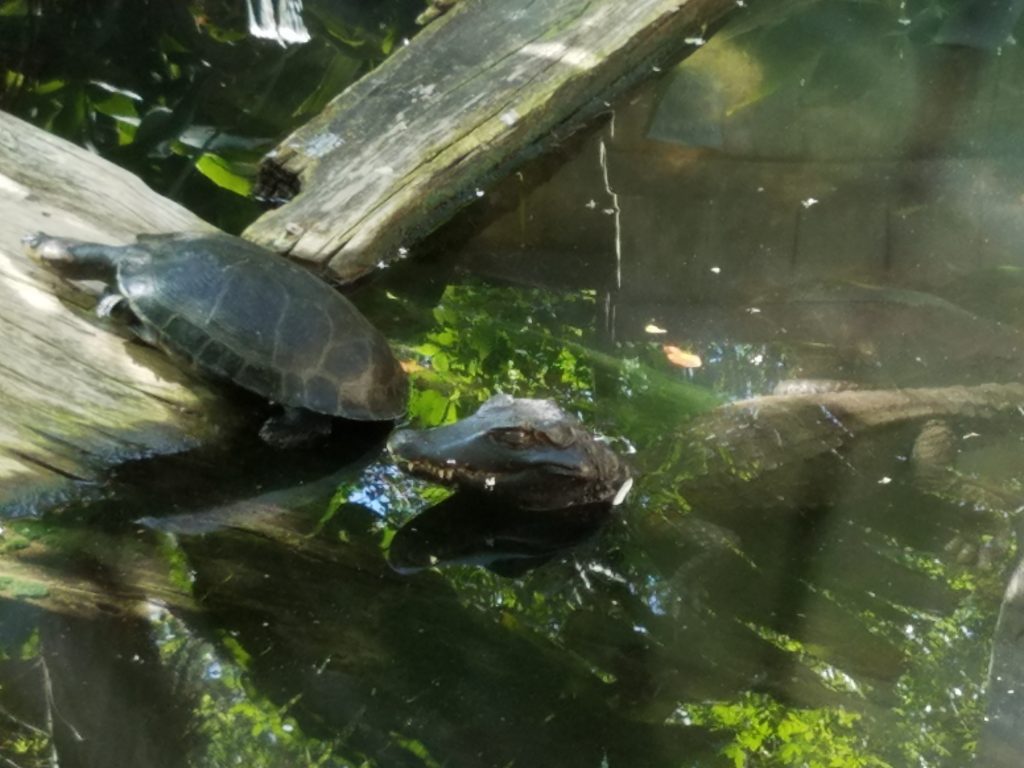 A dwarf caiman with its friend the yellow-spotted turtle.

I did not take advantage of this, but you can buy a photographer’s pass. You can get an annual one (I don’t remember the price) or a two-day pass for about $78. The special pass lets you into the park at 8:00 am (before opening), and lets you stay after 9:00 pm when the park closes, and allows you up onto a viewing platform overlooking the rookery. Photographers and bird lovers, this is the deal for you. Clearly, late April, early May is a great time, because it’s mating season and nesting season and there is plenty of action.

It’s a pretty interesting place. If you’re in St Augustine, check it out. 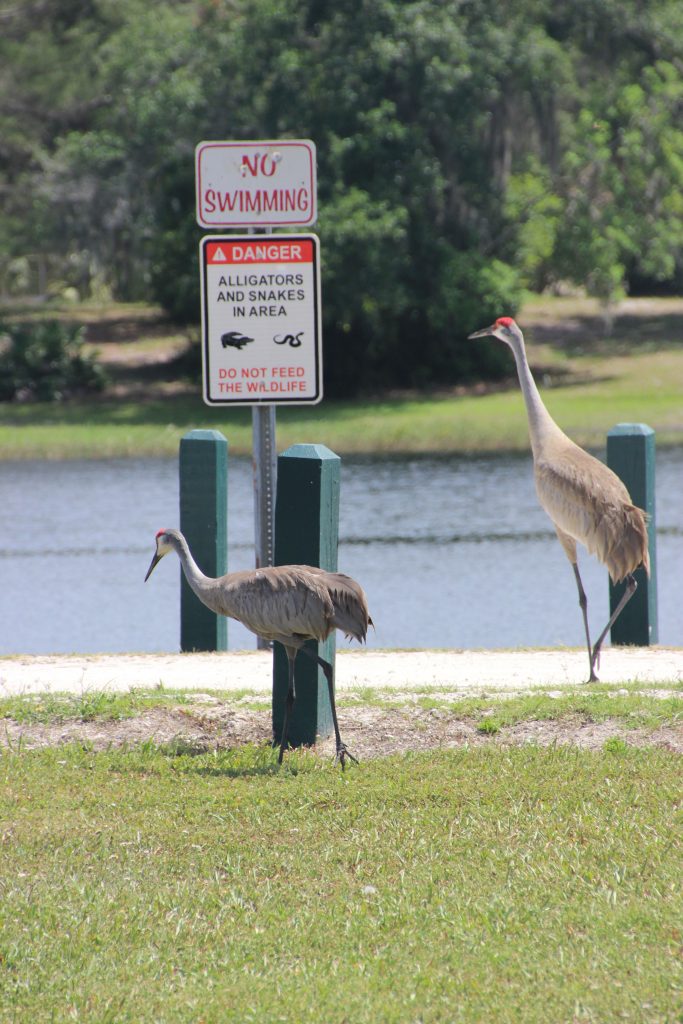 And remember, alligators outside of zoos are plenty dangerous too.

This entry was posted in View from the Road and tagged Florida Trip, Lake Placid, St Augustine Alligator Farm. Bookmark the permalink.