So, as most of you probably already knew, the best day to go shopping for Halloween decorations is the day before Halloween.  Everything was at least 25% off and one store had things marked down by 40%.  That store, by the way, was across the freeway from Dianne’s, where I was headed to pick up my costume.

After I got it–and it looks great!–I stopped at a shop in eastern Santa Rosa called the Classic Duck.  It used to be in a mall at the north end of town but it moved.  It is frou-frou, which is a phrase I usually use to be denigrating, but not in this case.  I love this store!  They have Christmas stuff and autumn stuff and jewelry and Thanksgiving stuff and table stuff and stuff for your deck and stuff for gifts and stuff for you mother-in-law and. . . it’s a great shop.

And their Halloween stuff was on sale, so I went a little crazy.  This may have been a case of post-costume euphoria, a rare but documented medical condition.  Possibly I should not have been driving while under the influence of the costume.

I had a very helpful clerk who searched through the back storage room twice to find something I was looking for.  Then he and I went scavening through the store and finally found one in a distant corner.  He was ringing me up.  I had bought a number of tiny Halloween ornaments.  Yes, that’s right, ornaments.  I was using one on a gift package and picked up a few more as hostess gifts for the party.  He admired them.  “My Halloween tree’s already filled, or I’d get a couple of these pumpkin ornaments,” he said.

Um, Halloween tree?  I read horror, so for a second, that conjured up a very gruesome picture!  Then I figured it out.

“I don’t have one, but I guess I’d look at manzanita or a piece of driftwood,” I said.  I used to have a driftwood grape root, and I hung my necklaces on it.  It was great.

I could see the wheels spinning in his head as I gathered up my bags.

About the costume, here it is on a hanger.  Here you can see the buckle a little better. 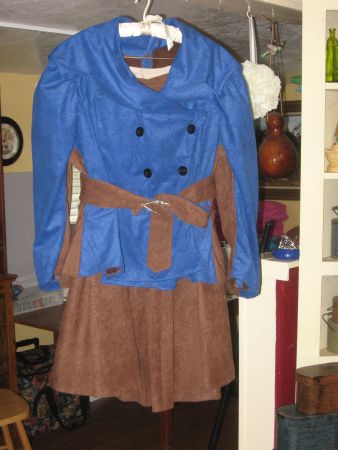 One Response to The Halloween Tree