In the Celtic tradition, October 31st is the end of the year, New Year’s Eve, basically.  It’s also the time when the veil between the world of the living and the world of the dead is at its thinnest. El Dia de los Muertos is also an acknowledgement of those who have passed beyond the veil; people go to cemeteries and clean off gravestones; they cook the favorite food of deceased loved ones, and leave them candy skulls as a remembrance.  Somehow harvest and the turn into the darkness have merged. That seems right, somehow.

The hosts of the Halloween party I went to wore matching costumes.  They had black slacks, Darth Vader helmets and black T-shirts that read “Come to the dark side. . . we have cookies.”  Karen started a debate over the logic of the shirt, stating as her premise that it should say, “We have Wookies,” in order to be more accurate.  She did not prevail.

Karen also took several pictures of my costume, including (finally) good pictures of the hat!  Thank you, Karen. 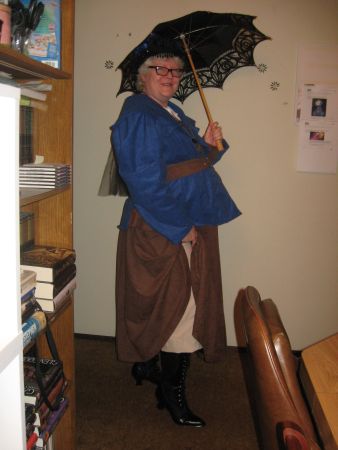 She managed to capture the bling as well, with a good photo of the buckle, and also of the clockwork-and-key pendant that I bought at the regatta. 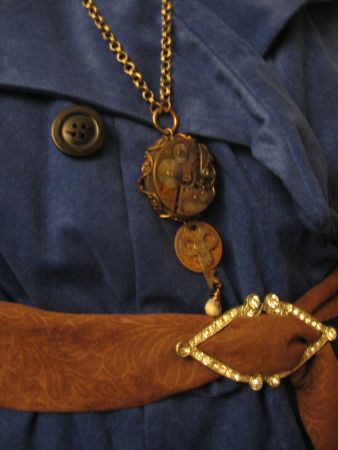 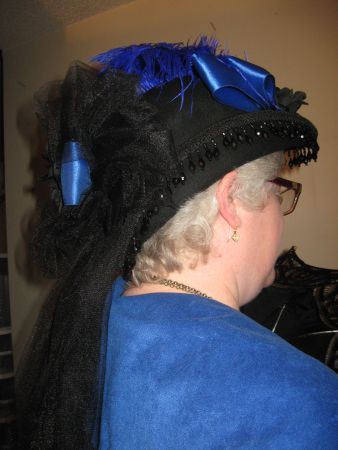 I talked to Karen’s husband, award-winning writer Brian Fies*, about my character.  Brian was a bit skeptical when I said my character’s husband had been killed by zombies.  He tactfully suggested that I could just be the spinster schoolmarm.  Perhaps he was a little disturbed by my blithely killing off a husband, even a fictional one. (I mean, I certainly don’t mean the Sig-O!  In my character’s life, the Sig-O is very much around, just in an. . .umm, let’s say unorthodox relationship.  I don’t believe women didn’t take lovers during the Victorian era, especially wealthy widows.  Did Brian think I wouldn’t make myself wealthy?)

There are more compelling reasons not to make my character a spinster.  One is, of course, money, but the other is that the hat I got is mostly black.  Black was not a fashion color for the Victorians, it signaled mourning.  Widows wore full black for the first year after a husband’s death, and only then could add some other colors, and they had to be careful.  Purple and lavender were also signals of widowhood.  I’m using the word “signal” deliberately.  You can talk all you want about it being about respect; it also let the world know you were looking for a husband and had some experience as a wife.

The reason people think all kinds of women wore black during Victorian times is because the queen herself stayed in mourning for the rest of her life after Albert died.  And, theoretically, in the steam-punk world, if you’re a woman who is shoveling coal into the steam engine of your war machine, black doesn’t show the dirt as much.

A spinster could be wearing black for a father, I suppose, but it’s unlikely and a little creepy.

So my character is a widow, and not a recent one, with some money, and she’s conventional, as the costume suggests, but she’s adventurous also.  She doesn’t dress like a man but she wears clothes that are practical for walking, riding and climbing.  She could be a society woman who followed Florence Nightingale to the Crimea, or an adventurer like Isabella Bird.  Since it’s steampunk, it seems to me that she is continuing the fight against the Zombie Menace, the very cause that took her dear husband’s life.

Bruce Campbell was in a Fox TV series years ago, called The Adventures of Briscoe County Jr. It started the same year the X-Files did, and may have been the lead-in.  It was a western, set in California in the 1890s, with strong science-fictional elements including mysterious energy orbs, a time-traveling villain, and Victorian-era inventions pushed decades forward, like dirigibles and television.  It lasted for about two seasons.  Fox didn’t know how to market it, because nobody knew what it was.  Was it a western?  Was it science fiction?  Was it comedy?  Of course, now we know.  It was steam-punk before steam-punk had a name.

I’ll be wearing the costume in another hour, when I stand by the door prepared to give out treats to the cats, the bunnies, the ghosts, the vampires, witches, goblins, princesses, ballerinas and—gasp! the horror—zombies who peregrinate through my neighborhood.  Happy Halloween everybody!

*On this blog, I will almost always preface the words “Brian Fies” with the words, “award- winning writer.”  Sometimes I’ll put “award winning graphic artist” instead, so watch closely!

This entry was posted in View from the Road and tagged Army of Darkness, Bruce Campbell, Halloween, Sam Raimi, Victorian costume, Victoriana. Bookmark the permalink.