The Hills and the Savannah (Safari West) 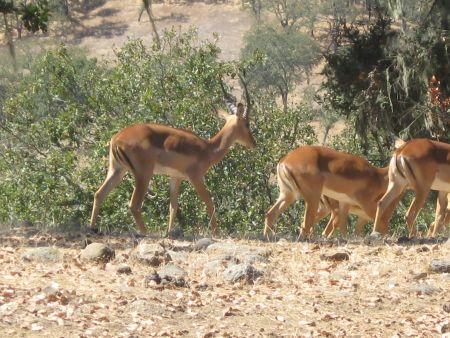 “For these animals, this is like Club Med,” Danny said. “Plenty of food and water, no predators.”  There is grass in the range area, mostly dry this time of year, that the antelopes will nosh on, but they are used to the alfalfa that is delivered from trucks by humans.

In the Back Forty, the first animal Danny pointed out was the aoudad, also known as Barbary sheep. A bachelor group was resting under the trees. In addition to stunning curved horns, the males grow beards long enough to reach their front hooves. During mating season, they urinate on their beards, saturating them with pheromones. Somehow, it doesn’t sound as charming to me as it probably would to a female aodad. (Pictures will follow in a later post—these animals were elusive and I had to use the long-lensed film camera). 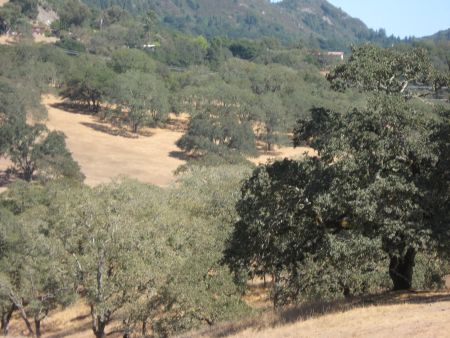 This whole area is fenced, but it is more like range land than corrals (the area near the administrative buildings has large corrals). Fences are more about keeping out native species than keeping animals in. We asked about predators.  What about bobcats and mountain lions? Danny snorted politely. “These animals are prey animals for tigers, leopards, cheetahs,” he said. “Lions.  Our little cats wouldn’t bother a twelve-hundred-pound Cape buffalo too much.” 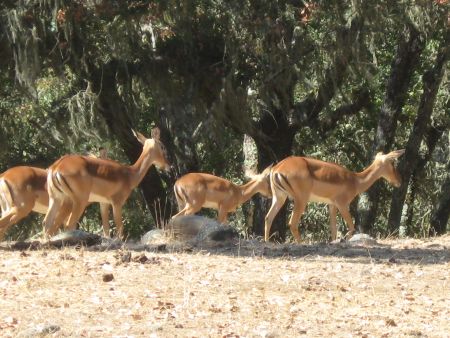 He stopped next to quiz us on the name of the animal we were seeing.  He gave us a hint; “Chevy named a car after them.” So we knew they were impala. Impala escape predators, he told us, not just by running, but by leaping. They can make a thirty-foot-long leap that’s ten feet high, out of reach of most predator cats. 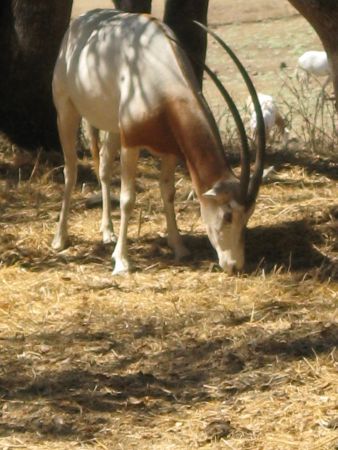 The scimitar-horned oryx is one of Danny’s favorite antelope because of its physiology. This larger, desert antelope is considered extinct in the wild. Its pale color marks it as a desert-dweller. This oryx can survive without ever drinking water, because it gets water from the plants and succulents it eats, and by licking condensation (dew) from its coat. It can also control (reduce) urination, and, he told us, it’s heterothermic. It can maintain different body temperatures in different parts of its body. It’s also gorgeous, but Danny didn’t mention that. The park has a small herd of these.

Danny talked a little bit about the movement to reintroduce some of these species back into habitat. Reintroduction would take several generations—for instance, the animals at the park, fed by humans, would not survive, but their offspring could survive on a bigger preserve, and then their offspring could be released to the wild.

We talked about the threats to animals; poaching certainly, and habitat loss, but one of the biggest causes of habitat loss in Africa is the human wars that have raged over the past decades. Genocide is not just for humans anymore.

Danny, who has a degree in anthropology and is attending graduate school to finish a paleontology degree, really likes antelope and gazelles, largely because he’s intrigued by migrations. I’d had guessed he’d be a primate guy, and he does like the primates too.  Taylor works every day with the grazers, and so she seemed to have a more matter of fact approach to them. 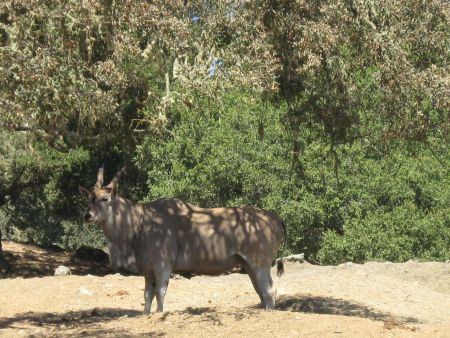 Eland are forest-dwelling antelope, one of the larger species. I had seen vertical white stripes on the body of one of the youngsters, and I thought it had scraped itself, but Danny and Taylor explained that the tan coloring and the white stripes are protective coloration. A few yards further on we found the buck of this herd, demonstrating camo for us. Eland males can reach a thousand pounds, and from a distance, this guy could be mistaken for a milk cow, except for those horns and that narrow, distinctive antelope face.

The wildebeests, or gnus, seemed quite relaxed as we drove up and parked next to them. These are strange looking animals. “They look like they’re made out of a bunch of other animals,” Danny said. He was proud of the gnu baby (see what I did there?) that had been born this spring. Being big on migrations, Danny has to be a gnu fan, since they have a long migration and two million animals a year make it. The wildebeest migration can be seen from outer space. The migration is, as he put it, “One long buffet for predators.” The herd loses two hundred thousand animals to predation, and just about that many calves are born during the migration. Gnu calves can stand within moments of birth, and run by the end of the day they’re born. Hardy little things. 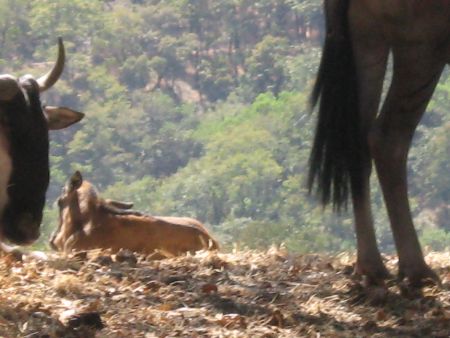 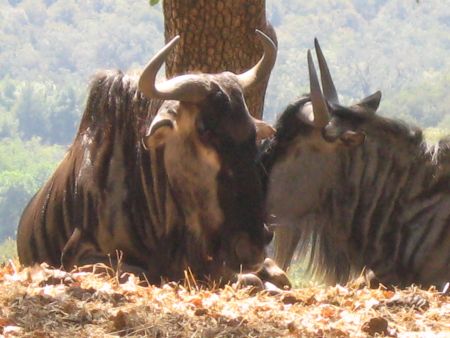 “This is the deadliest animal for humans in Africa,” Danny said. “It kills more people than tigers, lions, rhinos, or gators.” Why, because it’s fierce and vicious? No, Danny says—because people hunt it, and if you don’t kill it on the first shot, you have serious problems. Cape buffalo also work in herds, and if you attack a calf, the entire herd will come after you. The animal just looks impressive, with those muscular haunches and uni-brow horns. These guys were pretty unconcerned about us. 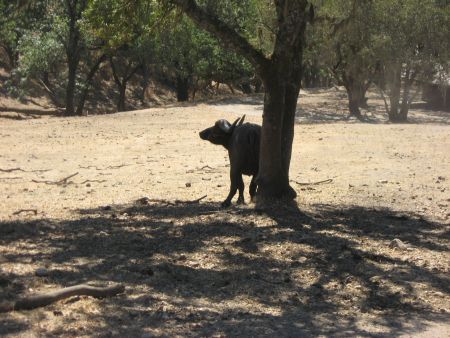 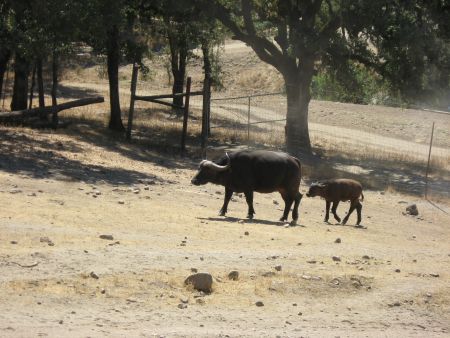 Spouse asked if the buffalo ever knocked down the fences to get to the lake.  Danny said no, “Although they could if they wanted to. Any one of our animals could either knock down a fence or jump it if they had a mind to.”

Our next stop would be zebra-town.