The Dickens Fair; in Which our Heroines Encounter an Eccentric, and Procure Refreshment 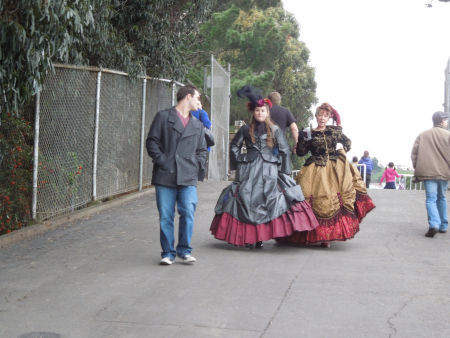 Victorian ladies with their Starbucks drinks

Spouse gave me an assignment before I left for the fair; come back with a report on the proportion of steam-punk-themes costumes to Dickensian, or street clothes. Certainly we were both expecting a large steam-punk contingent. To my surprise, the actual number of steam-punkers was quite small. I doubt it reached 10% of the total crowd. To be fair, you can “dress down” your steam-punk by taking off the outlandish weapons and removing some of the brass, and have an acceptable “straight” Victorian costume. 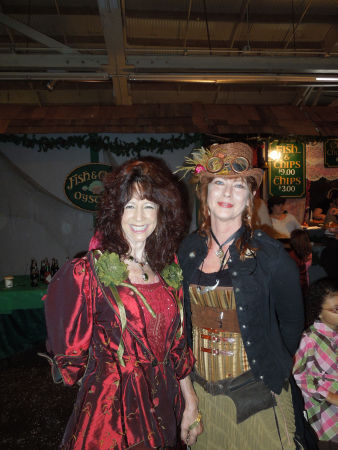 The Professor, however, embraced his steam-punkishness. His workshop (booth) is located in a seedy part of town; not the quayside, certainly, but definitely not gentrified. 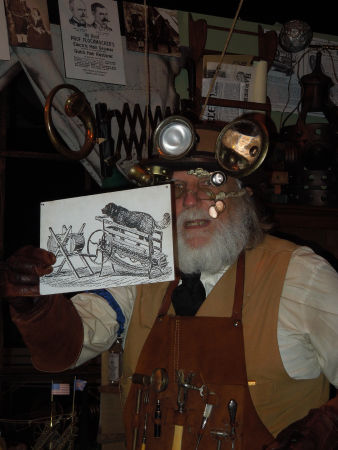 The professor regaled us with descriptions of several of his labor-saving devices. He also sold a tonic (hmm…) We were not invited to try the tonic. 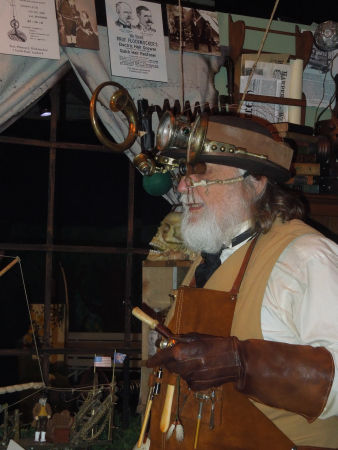 Across the street from the professor’s workshop ran a spring-wound carousel. 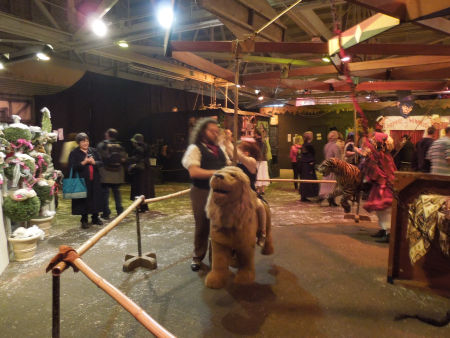 Lillian gets ready to take a picture. 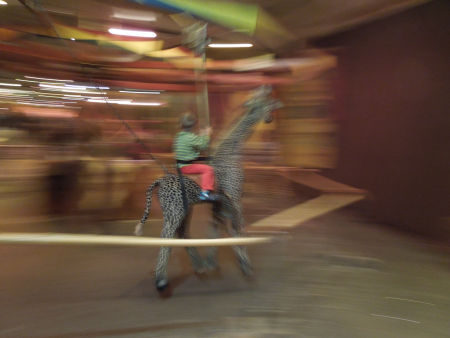 We walked down to the fencing studio, where a lesson took place. Directly behind them, on the Pennygraff Stage, another fencing lesson was in process as well. 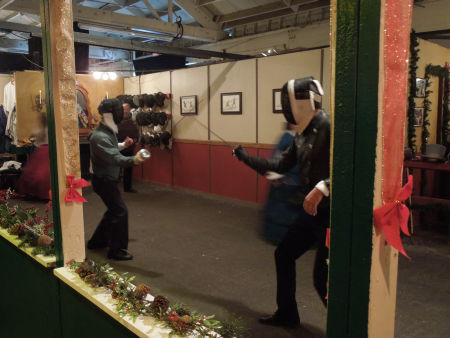 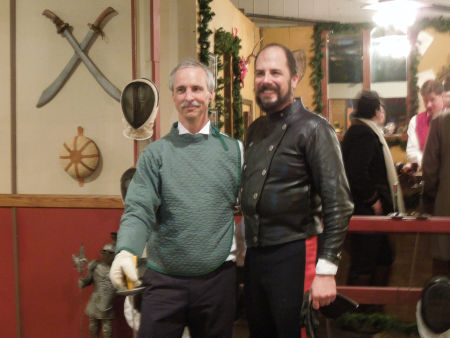 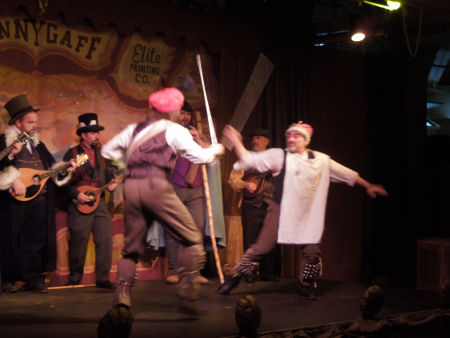 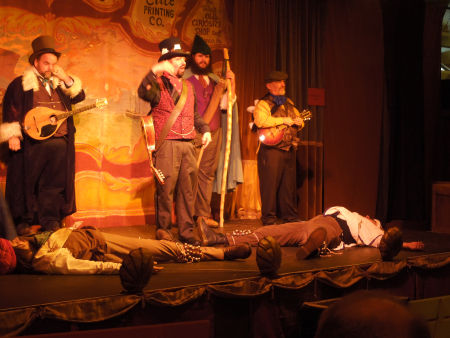 At the Adventurers’ Club, gentlemen and ladies shared memoirs of their various experiences with an attentive crowd. 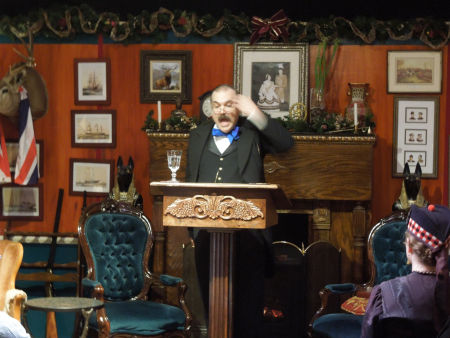 We chose The Tippling Toad for lunch. The Tippling Toad had a sit-down dining room, but you had to reserve it in advance, so we found a space at the picnic tables instead. Lillian had duck ala’orange and I had a chicken breast. The entrée came with rice pilaf and steamed vegetables, squash and green beans. It was expensive, which was no surprise, but quite tasty, and the pumpkin pie for dessert was scrumptious. 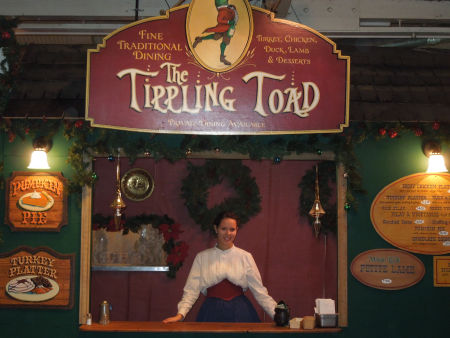 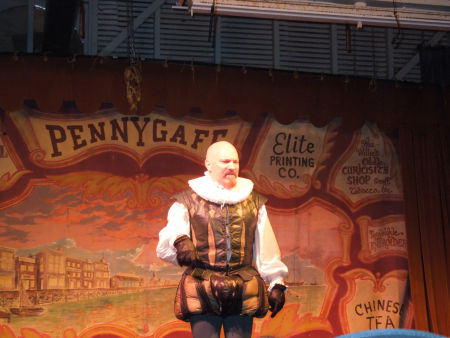 The energetic Shakespeare troupe did not waste anyone’s time with lengthy monologues or bits of poetic banter; they went right to the fight scenes and the death scenes. They demonstrated “an alarum,” for us. (“Don’t blink,” the moderator warned, and they all fell down dead.) Then, so that we could appreciate the artistry of it, they did it again in slow motion. And somehow, in slow motion, it got a lot… longer. 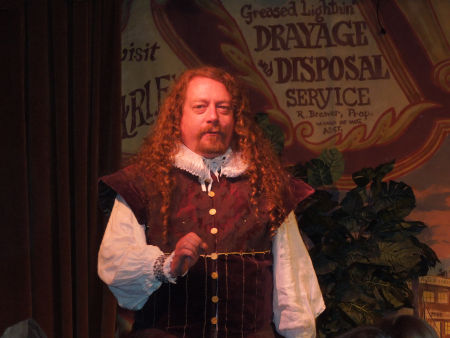 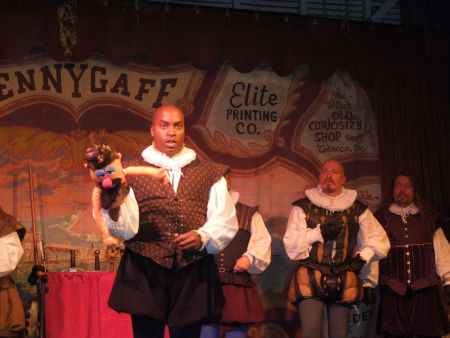 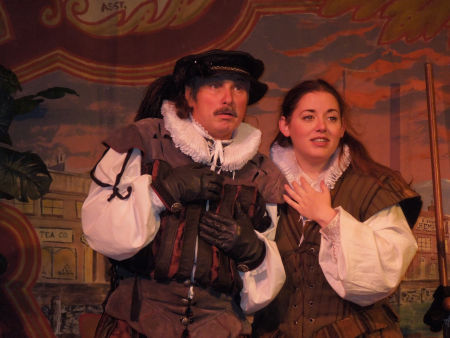 Soon, however, we were seduced by music… and dance. (To be continued.)