Horses in the Foam; Goat Rock 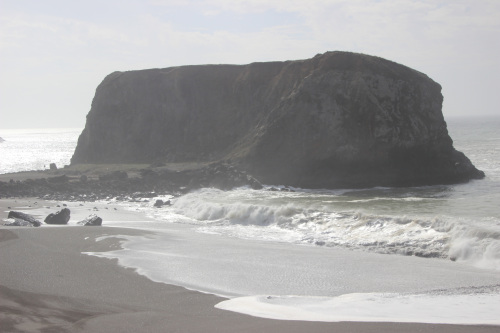 My mother in law, who has lived in this county for sixty-plus years, told me she had never been to Goat Rock Beach. This had to be remedied, so when we went for a drive on Friday, that’s where we went. The local story about the rock is that a coastal farmer used to graze his goats on it. I cannot verify the accuracy of that statement. I can say that at least twice a year, the county REACH helicopter, Henry One, has to rescue a climber off of Goat Rock, and during my lifetime there have been at least six fatalities on the rock… maybe more, but those are the ones I remember. 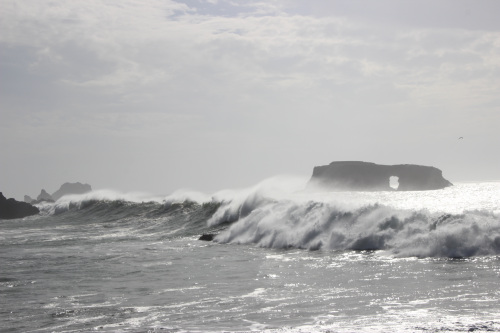 There was plenty of wave action. Farther south, in Half Moon Bay, the annual Maverick Surf Invitational was going on, and they were getting 25-foot high waves. While ours weren’t that high, they were pretty impressive.

Goat Rock was my parents’ choice of beaches when we would go out to the coast. I never knew exactly why this one was their favorite, but they liked it, and it was the beach I grew up with. Later in high school, Salmon Creek Beach was the party beach for my set. We’d have illegal campfires and they would drink beer or super-sweetly-flavored wine drinks (Annie Greensprings. Seriously.). I usually didn’t join in. I was the designated driver before that term was in popular use, but my friends also saw in the value in a designated talker, the obviously-not-drunk good girl who could persuade any curious adult that really, we came out to watch the sunset and were just leaving.

Honestly, Salmon Creek Beach is kind of long and flat. The most picturesque thing about it is the hamlet of Salmon Creek, which looks like the movie set for an atmospheric horror movie — a good one, with lots of play of light and shadow, interesting characters, good acting and inexorably building suspense. Oh, wait, that would be The Birds, directed by Alfred Hitchcock, which was not filmed in either Salmon Creek or Bodega Bay but in the town of Bodega, ten miles inland. Such is the power of film.

We parked in the south parking lot of Goat Rock, in the shadow of the rock. Anne warned me to be careful when I got out to take pictures. “Be careful our there,” she said. “I mean it, now. Remember, I don’t drive.”

Horses in the Mist 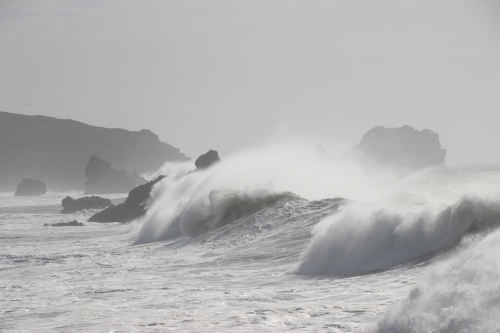 This is what the waves looked like. Long ago, someone told me that the Celtic myth of the kelpie, the mythological horse-creature that comes out of the sea (and drags human back into the sea with it) came from the shape of these breakers; the forward curl looking like a horse’s neck, the streamers of spray looking like a horse’s mane. I don’t know if that’s true or not, but the shape does suggest racing horses.

We stopped at The Tides for lunch. Usually, we eat at Lucas Wharf, which Anne likes, but we thought we’d try something different. I had vaguely planned to stop at the Sandpiper, which is up the hill in Bodega Bay, overlooking a wedge of the bay, but I missed the turn. The Tides is the old, venerable establishment. It’s been remodeled a few times, and right now contains a gift shop, snack bar, fish market and restaurant. No pictures, although I did get a nice one, through the curtain mesh, of a drowsy seagull taking a break. 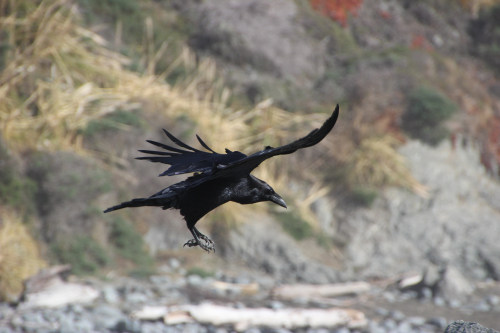 And last, the obligatory raven picture.

One Response to Horses in the Foam; Goat Rock