I said I would write more about Luma-Con’s prominently posted Inclusion and Anti-Harassment policy. It may be a far less interesting topic than costumes, whether Marvel or DC has the best heroes, or which space opera game is the best, but it is important. Because so many examples at conventions lately have been of failures, I would like to discuss a policy and approach that appears to have been successful.

In the past several years, the veil of harassment (usually, but not always, sexual) has been lifted at many national themed conventions in the speculative fiction world, exposing a long-standing pattern of unwanted sexual comments, touching, pejorative language, homophobia and bullying. Most of the people exposing the behavior — again, not all — have been women. As cosplay becomes more popular and more young people choose it as their way to express their creativity, the issue of inclusiveness and a safe environment becomes crucial.

John Scalzi, who is a well known science fiction writer, blogger and personality, pushed this issue somewhat by saying that he would only agree to participate in cons that had a published anti-harassment policy. On his blog Whatever, he went so far as to delineate what he thought the policy should involve. 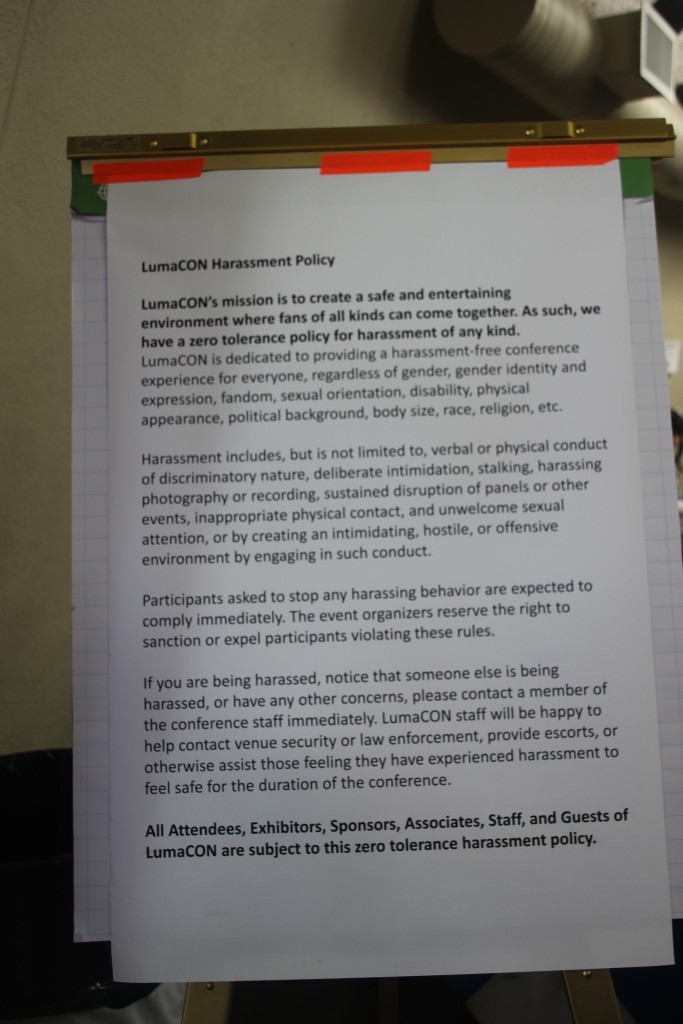 I like that it starts with what they want; a safe, entertaining environment. Then they spell out, including that dreaded but necessary phrase, “including but not limited to,” what is not tolerated. Why is that phrase necessary? It’s needed because a certain category of miscreant will push any boundary, look for any crack or pinhole in a rule or policy. “I was just standing close behind her and breathing heavily. I wasn’t doing anything. Are you saying I can’t breathe now?” The type of bullies who enjoy telling their victims that they should toughen up and learn to take a joke are frequently the biggest whiners when they are called on their aggression. This policy removes plausible deniability.

I did not find the policy on the LumaCON website anywhere, but this poster was right beside the registration table. You might have chosen not to read it, but you couldn’t claim you didn’t see it.

Because I got there late I didn’t hear the opening remarks, but I think the staff wore badges. If I had seen a problem, I would have gone to the registration table or the First Aid table first.

Isn’t this overkill for a fun, family event, where most of the participants were very young, and many were with their parents? For the first convention, it might be erring on the side of caution. This con is going to grow in popularity. They are less likely to ever have a problem because they have developed a policy and set a tone from the very first LumaCON.

How did they rate? I give the policy a B+. They were thoughtful about crafting the policy and they had it well displayed. (I would have liked to have found it on the website.) And they got some bonus points with me for having one at all. The planners of LumaCON did their homework and it shows.